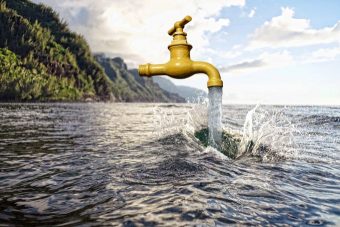 We know that Trump digs coal, but of all the fossil fuels, coal is Earth’s biggest polluter. The environmental impact of the coal industry is vast and devastating. And now, production of this cheap energy source has rendered nearly a third of the surface water in China’s largest coal province unsuitable for human consumption.

The Shanxi Environmental Protection Bureau, a local environmental watchdog, announced that 29 out of 100 surface water sites tested in the first three quarters of 2016 were found to be “below grade five,” Reutersreported. At that pollution level, water has “lost functionality” and may only be suitable for industrial or agricultural use.

Sure, China’s coal industry provides jobs and allows people to heat their homes but the smog-choked country has paid a price for it. As Dr. David Suzuki wrote, “Beijing’s 21-million residents live in a toxic fog of particulate matter, ozone, sulphur dioxide, mercury, cadmium, lead and other contaminants, mainly caused by factories and coal burning. Schools and workplaces regularly shut down when pollution exceeds hazardous levels. People have exchanged paper and cotton masks for more elaborate, filtered respirators. Cancer has become the leading cause of death in the city and throughout the country.”

That being said, China’s coal use is on the decline. After reaching peak coal in 2013, the country is rapidly shifting to renewables, according to the latest International Energy Agency’s World Energy Outlook Report.

“Coal generated 84 percent of all electricity in China in 2014, the IEA’s current policy scenario forecasts that market share is going to drop down to 54 per cent in 2040,” Institute of Energy Economics and Financial Analysis director Tim Buckley told ABC.net.

In a new study published in the journal Earth System Science Data,researchers found that China’s decline in coal has led to a global slowdown in carbon dioxide emissions. “Emissions have leveled off at about 36 billion metric tonnes in the past three years even though the world economy has expanded,” the Independent reported from the study.

China’s shift from coal is actually part of a larger global trend. An Energydesk analysis revealed that coal use around the world is dropping at a record-breaking rate as commodity markets are tanking, renewable energy is rising and energy demand growth is slowing.

Meanwhile, President-elect Donald Trump has pledged to bring back coal in the U.S. The climate-denier-in-chief has also promised to gut the U.S. Environmental Protection Agency, pull out of the Paris climate treaty and undo President Obama’s signature Clean Power Plan aimed at reducing carbon pollution from power plants to tackle climate change.