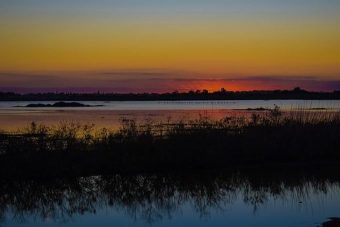 It’s World Wetlands Day on 2 February – and there has never been a more important time for us to take stock of what’s being celebrated and why. That’s because the future of our wetlands and the future of humanity itself are inextricably connected, and 2021 is our best opportunity to do something about it.

For much of our recent history we’ve treated wetlands like they don’t matter. Coasts are there to build on, rivers and lakes are there to provide limitless water supplies for farms and factories, swamps are there to be drained for development. Here in the Mediterranean we’ve been converting and degrading our wetlands for centuries, and since 1970 we’ve lost half of what remained.

What too many of us still ignore though is that life begins in wetlands, and wetlands keep life going. If we’re to have any hope of solving the growing challenges our region faces and if we want to secure a sustainable future for Mediterranean people, then it’s time for a new beginning and a concerted, communal effort to save and restore these vital ecosystems.

Wetlands come in diverse natural and artificial forms, from rivers and lakes to marshes, ponds, coastal systems and marine areas, and between them they provide fundamental natural services on which depend the livelihood of millions of people in the Mediterranean Basin. Not only do wetlands store and purify most of our drinking water, they supply food and raw materials, sustaining local economies. They’re also vital hubs for biodiversity, and they have a critically important role to play in the fight against climate change.

But today in the Mediterranean the growing demands of agriculture, industry, tourism and urban development have pushed our wetlands to the brink. Over-abstraction of water (two-thirds of it for farming) has reduced flows between 25-75% in recent decades, and freshwater availability is projected to decrease by 15% over the next 20 years. As wetland habitats are drained and destroyed, vital natural systems are breaking down even as demand continues to rise.

How can we carry on like this? The simple answer is we can’t. Current projections for the Mediterranean region show some 250 million people living under water-stressed conditions by 2040, up from an already shocking 180 million today.

Climate change – which figures show is hitting the Mediterranean 20% harder than most other parts of the world – is amplifying the crisis, raising temperatures, reducing rainfall and driving a sharp increase in floods, storms, droughts and other extreme weather events.

At the same time, a biodiversity crisis is unfolding rapidly in the region. Wetlands are among the most biodiverse of all ecosystems, but in the Mediterranean wetland vertebrate abundance has nearly halved since 1990, and over a third of wetland species are threatened with extinction. Development and pollution are taking a disastrous toll.

Biodiversity loss and climate change are two sides of the same coin: both are driven by human activities, and each makes the other worse.

Yet wetland ecosystems can provide invaluable natural solutions – but only if we allow them to function properly.

Healthy wetlands store and purify water, and here in the Mediterranean we desperately need more clean water as our atmosphere heats up and our population keeps growing.

Healthy wetlands also capture greenhouse gases, cooling the planet. Coastal wetlands sequester carbon per unit area at a rate 10-20 times faster than terrestrial systems – but when they’re destroyed, part of that carbon is released back into the atmosphere.

Wetland ecosystems have a vital role in protecting Mediterranean communities from the growing risks associated with climate change. They buffer us from extremes of all kinds, such as ongoing sea level rise or increasingly frequent and violent storm surges. Further inland, wetlands soak up intense rainfall, guard against flooding, and replenish low flows in times of drought. They are referred to as unique nature-based solutions offering services of great social, economic and environmental value to humankind.

To meet the challenge we need drastic changes, and 2021 offers unmissable opportunities to make them: the world is to decide on a new global framework for biodiversity, the European Union is committed to a greener future under the European Green Deal and the UN is launching the decade for the restoration of ecosystems.

This makes it the perfect time to launch innovative policies and management schemes in the region promoting wetland restoration and sustainability as well as equitable resource use in agriculture, industry and tourism alike. All stakeholders – local communities, the private sector, public authorities, academia, NGOs and international donors – have a role to play to give wetland conservation and restoration the boost they need. The social, economic and political stability of the Mediterranean Basin really is at stake.

And what about the public, what can we do? Well, wetlands concern us all, and it’s in everyone’s best interests to learn more about how important these amazing ecosystems really are, to spread the word and to support everybody who’s out there preserving and restoring them.

World Wetlands Day 2021 is the perfect opportunity to start making a difference for the future of Mediterranean biodiversity and people, at all levels.