You would think streaming music is more eco-friendly than CDs, tapes and records, right? Afterall, there’s no waste. A new study by the Universities of Glasglow and Oslo calculated the carbon footprint associated with downloading and streaming music and the answer is surprising. According to data from 2015 and 2016, music streaming accounted for 200 to 350 million kilograms of greenhouse gas emissions. 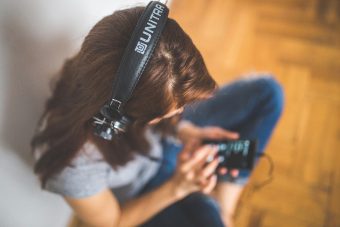 The study used data records from the Recording Industry Association of America. First, researchers took the total number of streamed and downloaded songs and multiplied it by the amount of electricity it takes to download 1 gigabyte of data. Each gigabyte is equivalent to the amount of electricity needed to light one light bulb for an hour. Next researchers investigated what kind of fuel sources are typically fueling music streaming sites— such as coal or renewable energy— and averaged the carbon dioxide emitted.

The totals do not reflect the carbon footprint of data storage and processing centers, nor the electricity it takes to power your cellphone or steaming device, so the comprehensive contribution to greenhouse gas emissions is actually much higher than the study initially indicates.

Music streaming giant, Spotify, did not respond to The Rolling Stone journalist’s request for comment, but they did publish a sustainability report in 2017, which promised to work toward carbon neutrality. By 2018, the new sustainability report indicated that they had closed almost all of their data centers and reduced their carbon footprint by 1,500 tons of carbon dioxide. In actuality, Spotify shifted to using Google Cloud services, which means that now Google data centers are responsible for the emissions, not that emissions have necessarily been cut. Streaming competitors Apple and Amazon have recently invested in renewable energy options for their centers.

Data centers in general are responsible for 2 percent of all greenhouse gas emissions, which is equivalent to the airline industry.

Music lovers who want to be more sustainable should buy full albums rather than streaming individual songs, especially if you plan to hit that repeat button a lot. According to their calculations, streaming 27 songs uses more energy than manufacturing the disc. For those of you who can’t imagine hopping in a time machine and buying a CD again, the authors suggest that downloading songs for offline listening could reduce the associated energy consumption.