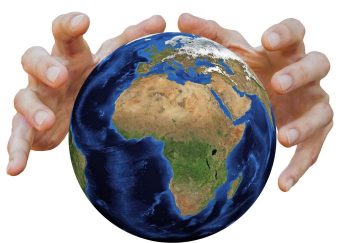 The work indicates that, even with current efforts to cut emissions, the Arctic will lose all its ice in summer within about 20 years.

Plummeting Arctic sea ice cover is one of the most obvious signs of climate change and is increasingly linked to extreme weather events such as storms and floods in Europe and severe cold snaps in the US.

The new study revealed a linear link between emissions of CO2 and the loss of Arctic sea ice, which has shrunk by half in the last 40 years. The link enables people to understand their own contribution to climate change, according to the leader of the work, Prof Dirk Notz, at the Max-Planck-Institute for Meteorology in Hamburg, Germany.

“It allows us, for the first time really, to intuitively grasp how we all individually contribute to global warming,” he said. “The observed numbers are very simple. For each tonne of CO2 that a person emits anywhere on this planet, three square metres of Arctic summer sea ice disappears.”

“So far the global warming debate has always been about very large numbers like billions of tonnes of CO2 or very small numbers like 0.1C of temperature change,” he said. “Our study allows us to understand that it is really our own individual actions, every day, that contribute to ongoing global warming.”

The research, published in the journal Science, analysed the declining extent of Arctic sea ice from 1953 to 2015 and found it tracked the emissions of CO2 from fossil fuel burning and other human activities. The relationship fits well with the underlying physics.

As a result, it is possible to calculate how much Arctic sea ice is lost as a result of an individual’s emissions. The average annual emissions of a citizen of the 35 rich nations in the Organisation for Economic Co-operation and Development (OECD) is 10 tonnes per year, leading to 30 sq m of ice being lost. Citizens of the US, Canada and Australia have a higher carbon footprint – about 16 tonnes – each causing almost 50 sq m of ice loss per year. In the UK, the average emissions are 7.5 tonnes per year, meaning 22.5 sq m of ice loss.

Prof Len Shaffrey, at the University of Reading in the UK, said the new research was sound and showed a new way of linking Arctic sea ice loss and personal CO2 emissions: “It means on average we are [each] responsible for the loss of tens of square metres of summer Arctic sea ice. That’s a pretty sobering thought.”

The link also allows the calculation of how much CO2 can be emitted in future before the Arctic is entirely ice-free in September, usually the month of the smallest extent. The scientists found 1,000 gigatonnes (GT) of CO2 was the limit. If all the carbon-cutting pledges currently made by the world’s nations are implemented, the Arctic will be ice free in summer in about 22 years, according to the new research.

The 1,000GT carbon budget is also the limit for keeping climate change below the internationally agreed threshold of 2C. This means that even if the Paris climate treaty, which enters into force on Friday, is successful, the Arctic will still become ice-free in summer.

However, the Paris treaty also includes an aspiration to limit the temperature rise to 1.5C, which would require radical cuts in CO2 emissions, including sucking the gas out of the air and burying it. If this was achieved, the Arctic ice cap would remain year round.

Arctic sea ice fell to its second lowest recorded extent in September, and scientists say this matters for a number of reasons. “By losing Arctic sea ice, we are losing a very effective refrigerator, as sea ice today reflects most of the sunlight and keeps the Arctic cool,’ said Notz. “If we lose this refrigerator, the Greenland ice cap will melt much more rapidly, for example, and drive up sea levels.”

Other scientists are increasingly linking the loss of Arctic sea ice to a weakening of a high level wind, called the jet stream, which is in turn linked to increasing extreme weather events, such as storms and floods in western Europe, severe cold snaps in the US and drought in California. “The jury is still out on how robust these studies are but there is mounting evidence,” said Notz.

“Also, we are destroying a landscape from this planet which is extremely beautiful and future generations would have nothing to look at but open water in September, so for me that is an ethical thing,” he said.