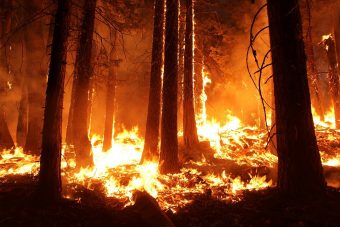 As predicted, the Thomas Fire in Southern California was officially declared the largest wildfire in state history, surpassing the 2003 Cedar Fire which burned 273,246 acres and killed 15 people.

The vast blaze, now 89 percent contained, has burned through 281,620 acres, according to CalFire. More than 1,000 structures have been destroyed or damaged and two people were killed.

But the other devastating aspect? A future of even more fires due to climate change. The world’s rising temperatures caused by greenhouse gases makes fires more likely to occur not just in California, but across the planet.

And in a vicious cycle, the Golden State’s recent string of fires has caused a sharp increase in unhealthy air and carbon dioxide emissions, which drives global climate change. So even if you don’t live in California, its fires also affect you and our future generations.

“The kinds of fires we’re seeing now generate millions of tons of GHG emissions. This is significant,” Dave Clegern, a spokesman for the state Air Resources Board, a regulatory body, told KQED Science.

While the amount of emissions from the December fires have yet to be calculated, October’s wine country blazes alone released as much pollution as motorists in the state normally emit in a year.

Additionally, burning trees not only release a powerful pollutant known as black carbon, but the loss of a forest also hampers CO2 sequestration, Jim Branham, executive officer at the Sierra Nevada Conservancy, noted to KQED.

The immense scale of the emissions could also undermine California’s climate change goal of cutting greenhouse gas emissions 40 percent by 2030.

California Governor Jerry Brown has warned that the state’s vast fires “could happen every year or every few years.”

“We’re facing a new reality in this state, where fires threaten people’s lives, their properties, their neighborhoods, and of course billions and billions of dollars,” Brown commented after surveying the Thomas Fire’s damage in Ventura County. “With climate change, some scientists are saying southern California is literally burning up.”

Indeed, California’s fires have become more and more destructive, with 14 of the top 20 largest fires in state history having occurred since 2000.