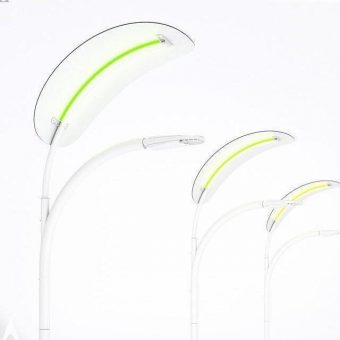 When most people think “clean energy,” solar panels and wind turbines typically come to mind. But what if the simple act of walking could create emissions-free electricity? Las Vegas is proving that kinetic energy is a real world solution to harmful carbon pollution that is causing global warming – by installing the world’s first smart streetlights powered by pedestrian footsteps. NYC-based EnGoPLANET partnered with the city to install lamps powered by solar panels and kinetic energy pads at Boulder Plaza in the Arts District.

“We want to provide the highest service levels while also looking to the future and ensuring that we are sustainable,” Las Vegas Mayor Carolyn G. Goodman said. “Through our LEED certified buildings, solar projects, water reclamation, alternative-fueled vehicles and sustainable streetlights, Las Vegas continues to lead the way. Las Vegas strives to be on the cutting edge of all things, and this project coincides with plans to develop an innovation district in our downtown.”

EnGoPLANET estimates that the world spends more than $40 billion per year in energy costs for the more than 300 million traditional streetlights that result in more than 100 million tons of carbon pollution annually. So solar-kinetic streetlights are a massive opportunity to help governments meet their climate targets as more cities announce plans to achieve net zero emissions and go 100 percent renewable energy.