The first steak grown from cells in the lab and not requiring the slaughter of a cow has been produced in Israel.

The meat is not the finished article: the prototype costs $50 for a small strip, and the taste needs perfecting, according to its makers. But it is the first meat grown outside an animal that has a muscle-like texture similar to conventional meat.

It marks a significant step forward for a nascent industry that aims to provide people with real meat without the huge environmental impact and welfare problems of intensive livestock production. Other companies are producing beef, chicken, duck and pork cells in the lab, but for unstructured items such as burgers and nuggets.

No lab-based meat products are on sale to the public yet, though a US company, Just, has said its chicken nuggets will soon be in a few restaurants. 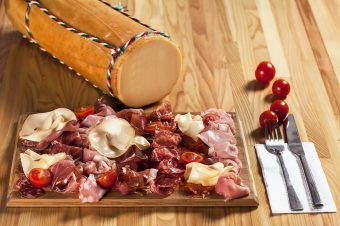 The lab-grown steak is at least three to four years away from commercial sale, according to Didier Toubia, the co-founder and chief executive of Aleph Farms.

The steak was produced using a mixture of cell types grown on a scaffold in a special medium, and Toubia said a series of challenges lay ahead to get the steak to market, including taste.

“It’s close and it tastes good, but we have a bit more work to make sure the taste is 100% similar to conventional meat,” he said. “But when you cook it, you really can smell the same smell of meat cooking.”

He said the $50 cost was “not insane” for a prototype. The first lab-grown beefburger, in 2013, cost €250,000. Toubia said the cost would come down as the production process was moved from the lab to a scalable commercial facility.

Another challenge is to increase the thickness of the steak, currently about 5mm. Here, the company is working with Prof Shulamit Levenberg, an expert in tissue engineering, at the Technion, Israel’s Institute of Technology.

Toubia’s team have already created a growth medium that is animal-free. The current standard for cell culture is foetal bovine serum, derived from the blood of cow foetuses, but it needs optimising. A few cells are needed to start the cell culture, and these are extracted from a living animal.

Plant-based alternatives to meat, such as the Impossible and Beyond burgers, have been proliferated as people try to reduce the amount of meat they eat. But Toubia said: “Today, over 90% of consumers eat meat and we think the percentage of vegetarians will not grow significantly despite many launches of plant-based products.

“If you want to have a real impact on the environment, we need to make sure we solve the issue of production, and we grow the meat in a more efficient, sustainable way, without any issues of animal welfare and no antibiotics.”

A series of recent scientific studies have found that massive reductions in meat-eating are essential in order to cut emissions of greenhouse gas and avoid climate change. One finding that avoiding meat and dairy products was the single biggest way to reduce the individual’s environmental impact on the planet, from slowing the annihilation of wildlife to healing dead zones in the oceans.

Lab-grown beef is very likely to have a much smaller environmental footprint than intensively reared beef. But Marco Springmann, at the University of Oxford, said: “Although the technologies are evolving, there is no indication that lab-grown meat is significantly better for the environment and health than existing alternatives to beef. The latest reviews have put the emission of lab-grown meat at several times that of chicken and far above any plant-based alternative, especially due to the large inputs energy required during production. ”
Louise Davies, of the UK’s Vegan Society, said: “We recognize the potential that lab-grown meat can have in reducing animal suffering and the environmental impact of animal farming. But whilst these products include starter cells derived from animals, they are not vegan. “

Other companies pursuing lab-based meat include Mosa Meats in Netherlands, set up by Prof Mark Post, who produced the original lab burger in 2013, and Memphis Meats, now part-owned by Tyson and Cargill, two of the world’s largest meat companies . There are also a series of earlier-stage companies such as Meatable, which aims to remove the need for repeated extraction of starter cells by creating lines that continuously multiply.

Despite creating a slaughter-free steak, Toubia said his company was not aiming to replace traditionally raised, grass-fed cattle. “We are not against traditional agriculture. The main issue today is with intensive, factory farming facilities, which are very inefficient and very polluting and have lost the relationship to the animal.”