The world’s first commercial plant to suck carbon dioxide out of the air will open today in Zurich in what its creators are claiming is a “historic moment” for negative emissions technology.

The Swiss Direct Air Capture (DAC) plant, developed by ClimeWorks, is now up and running on the roof of a waste recovery site. Powered by waste heat from the facility, it is drawing out carbon dioxide from the atmosphere to be used by a nearby greenhouse run by German salad growers Gebrüder Meier Primanatura AG.

Christoph Gebald, co-founder and managing director of ClimeWorks, told reporters yesterday carbon capture technology will be essential for delivering net zero emissions by the end of the century, as set out in the Paris Agreement.

“It is clear today that we won’t be able to achieve zero gigatonnes by the end of the century without the use of carbon removal technologies,” he said on a call.

Gebald said the technology employed at the new plant could be easily scaled up and combined with underground CO2 storage to deliver a viable negative emissions technology. 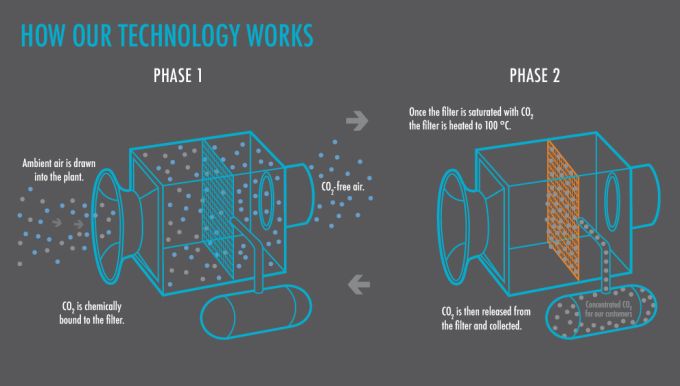 The plant works by using a specially designed filter to trap carbon dioxide out of the air, which is then isolated at a temperature of about 100 degrees Celsius. The captured gas is funnelled via an underground pipe to the greenhouses, where it is used to boost plant growth.

Other commercial uses could include carbonation for soft drinks or the production of climate-neutral fuel.

The site is the first DAC plant to have a commercial customer for its capture technology. It is producing CO2 for 600CHF per tonne ($615), which is below cost forecasts from scientists but still far above the current market price Gebrüder Meier Primanatura AG is paying. The difference in cost is being supported by investment from ClimeWorks and from the Swiss Federal Office of Energy.

However, Gebald insisted that rapid cost reductions are in the pipeline, with the cost of CO2 capture expected to hit $200 per tonne within the next three years and $100 per tonne by 2025-2030. This would make the technology fully commercially viable for industrial CO2 purchasers, he said.

Adding sequestration to the ClimeWorks system – thought crucial as industrial demand for CO2 is not high enough to meet climate goals – will add around $10-$20 to the per tonne cost of CO2 capture, Gebald added.

The advent of a commercially viable system for CO2 capture could prove a lifeline for the carbon capture and storage (CCS) sector, which has struggled to overcome technical and cost concerns in recent years. Since the UK government unexpectedly scrapped a £1bn CCS competition the industry has all but ground to a halt in Britain, despite it deemed vital by climate advisors for the country to meet its emission reduction targets cost-effectively.

ClimeWorks said the DAC plant is designed as a modular system so can be set up near to the CO2 customer to cut down on transport emissions. The Swiss firm is keen to launch more plants in its core target markets, as well as test how its technology works alongside underground CO2 storage. It currently has seven pilot plants operating or in planning stages.

ClimeWorks has set a goal of filtering one per cent of global CO2 emissions by 2025 – to achieve this Gebald said around 250,000 DAC plants like the Zurich operation will be needed. For this to be commercially viable, he admitted a carbon price will be necessary, perhaps from progressive firms looking to market themselves as ‘carbon-negative’. “We hope that there will be pioneering companies who support our vision with a private carbon market,” he said.