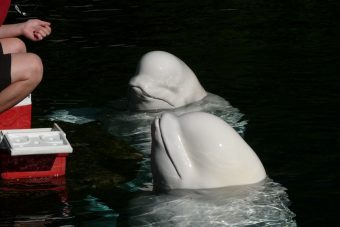 In 2019, two beluga whales, named Little Grey and Little White, will be transported from the Changfeng Ocean World aquarium in Shanghai to the world’s first whale sanctuary in a protected bay in Iceland. Established by the SEA LIFE Trust in collaboration with the Whale and Dolphin Conservation, the 32,000-square-meter Beluga Whale Sanctuary site was chosen for its sub-arctic climate and seclusion. “It’s really important for Little White and Little Grey, providing them with a more natural home in which to live out the rest of their lives,” head of the SEA LIFE Trust Andy Bool told Reuters. The whales are already being prepped for their journey and the colder waters of their new home through exercises designed to increase their strength and their ability to hold their breath underwater.

With its stores of blubber and echolocation refined for finding holes in the sea ice through which to breathe, the beluga whale is well adapted to Arctic waters. The beluga is also a very social animal, typically living in groups of up to 10, though gatherings of hundreds or thousands of whales can occur in summer. While the species as a whole is not considered threatened, populations in certain regions, such as the Cook Inlet in Alaska, are endangered.

In addition to their exercise regimen, Little Grey and Little White, both 12-year-old females, will be fed increased calories and gradually eased into using a stretcher, with which they will be restrained for part of their journey to their new home. Those who have made this sanctuary possible hope that it will set an example for other wildlife entertainment parks to release their animals into the wild. Whale and Dolphin Conservation captivity campaign manager Cathy Williamson told Reuters, “We believe this will inspire other facilities to move their belugas and other whales and dolphins to sanctuaries in other parts of the world.”