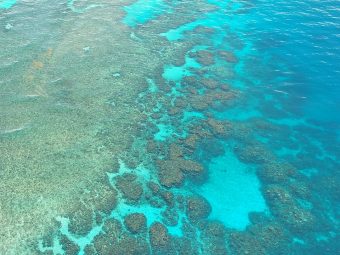 The vast majority of the world’s coral reefs are now reaching the point of no return — the point at which it wouldn’t even theoretically be possible to save them from disappearing completely (some argue that this point has long since been passed, it should be noted).

A new study published in the journal Science, for instance, found that extreme bleaching events that during the last decades of the 20th century are now occurring just every 5-6 years; and that the rate at which these events occur seems to be rapidly increasing.

That work — which involved the surveying of 100 different coral reefs around the world — reveals that even the “worst case scenarios” of a couple of decades ago were vast underestimates of the danger. (It’s notable that this is apparently the same situation as that now facing climate science — other than James Hansen and a few others, not many in the field seem to be making predictions that track with the speed at which changes are now occurring.)

“These impacts are stacking up at a pace and at a severity that I never had anticipated, even as an expert,” explained Kim Cobb, a climate researcher and coral researcher at the Georgia Institute of Technology. “It’s really the rapidity of it that is so sobering and shocking — and for me personally, life-altering.”

For the coral reefs and the animals that live in them as well, of course.

For those unfamiliar with the subject, coral bleaching is an event where heat, infection, and other causes lead to corals forcibly expelling the symbiotic algae that they are ultimately dependent upon for survival (the algae produce some of the food that the coral animals survive on).

Following bleaching, corals often die back greatly (or completely), and repeated events over short periods of time (just a few years, etc.) can lead to the complete death of reefs.

What’s particularly notable about this situation is that coral bleaching was effectively unheard of just a few decades ago. The rapid beginning and intensification of coral bleaching events represents a phase-change far more than it does a simple linear spread.

In other words, everything on the surface seemed in many ways completely fine, and then all of a sudden everything seemed to change, and now it isn’t. Expect to see much, much more of the same over the coming years — as climate weirding gives the old trickster gods of the past a free hand to undermine people’s misplaced assumptions, projections, and expectations.

“It is clear already that we’re going to lose most of the world’s coral reefs,” explained study coauthor Mark Eakin, the coordinator of the National Oceanic and Atmospheric Administration’s Coral Reef Watch program.

Eakin also noted that ocean temperatures are expected (based on conservative estimates) to warm enough by 2050 that around 90% of the world’s coral reefs will experience bleaching events every year — that’s if they’re still around at all, that is.

With regard to the new study, Grist provides more:

“The new study finds that 94% of surveyed coral reefs have experienced a severe bleaching event since the 1980s. Only 6 sites surveyed were unaffected. They are scattered around the world, meaning no ocean basin on Earth has been entirely spared. The implications of these data in a warming world, taken together with other ongoing marine stressors like overfishing and pollution, are damning.

“…For conservation biologists like Josh Drew, whose work focuses on coral reefs near Fiji, that loss of recovery time amounts to a ‘death warrant for coral reefs as we know them. I’m not saying we’re not going to have reefs at all, but those reefs that survive are going to be fundamentally different,’ says Drew, who is not affiliated with the new study. ‘We are selecting for corals that are effectively weedy, for things that can grow back in two to three years, for things that are accustomed to having hot water.’”

So, why does all of this matter? Coral reefs are currently home to about 25% of all known marine species, despite only comprising 0.5% of the ocean’s topographical area. In other words, they are the most densely populated and biologically active parts of the ocean (by some means of accounting, probably not all).

What’s perhaps more notable here, though, is that coral reefs serve as spawning and early-life habitats to many marine species that then spend the rest of their lives elsewhere in the ocean. If the world’s coral reefs mostly disappear then the effects on the broader marine environment are likely to be enormous and profound.

In accompaniment to ocean acidification, overfishing, and increasing levels of pollution, the future of the marine world looks incredibly bleak.

It’s worth remembering, though, that the actions that would limit the wholesale destruction of the world’s coral reefs are also those that would help to prevent the mass extinction of land life as well — and the end of large-scale human populations and culture, for that matter.