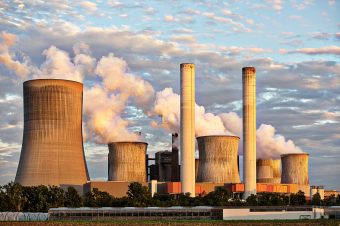 As Donald Trump pledges to put coal miners back to work in the United States, the rest of the world appears to have suddenly started moving in the opposite direction, abandoning the dirtiest of fossil fuels after 10 years of expansion, according to a new analysis.

Boom and Bust 2017, compiled by US environmental group the Sierra Club, Greenpeace and research group CoalSwarm, reported a 62 per cent fall in the number of new coal-fired power stations being built worldwide in 2016 and a 48 per cent drop in “pre-construction activity”.

Such a dramatic slowdown, they argued, meant that the world could now hope to keep global warming to within two degrees Celsius above pre-industrial levels, the point at which climate change is thought would become particularly dangerous.

And the more ambitious target of 1.5C, agreed at the Paris climate summit, “remains possible but would require much faster retirement” of existing coal plants.

The UK Government has pledged to phase out “unabated” coal power stations by 2025. While this suggests at least some emissions would have to be captured in some way, Ministers have not actually decided what they level they will require.

The coal industry dismissed the report, insisting that renewable energy was not displacing coal in India and that China was not moving away from it – even though the number of coal-fired power stations is being reduced.

However the Boom and Bust report expressed optimism that the tide was finally turning against coal.

“For the first time since the beginning of the global coal boom a decade ago, developments in East and South Asia – in particular China’s wide-reaching restrictions on new coal plants and India’s indication that no new coal power is needed through at least the next decade – appear to have brought global climate goals within feasible reach, raising the prospect that the worst levels of climate change might be avoided,” the report said.

“More progress is needed and the margin for error is tight, but the results of the past year provide good reason for optimism.”

It said the surge in coal power stations over the past 10 years had been “a source of deep concern”.

“The apparent likelihood that coal combustion would continue to grow for decades appeared to undermine any prospects for preventing irreversible climate change,” the report said.

“Beginning in 2013, power generation from coal began falling worldwide and has continued to decline.

“Now the dramatic shrinkage in the coal power pipeline – nearly 50 per cent in a single year – shows that power capacity trends are moving into alignment with declining power generation and that climate goals are indeed within reach without massive asset stranding.”

Greenpeace hailed the report’s findings, saying 2016 had been a “veritable turning point”.

And Nicole Ghio, of the Sierra Club, said it was clear that renewable energy were becoming cheaper than the cheapest of fossil fuels.

“The staggering uptick in clean energy and reduction in the new coal plant pipeline is even more proof that coal isn’t just bad for public health and the environment – it’s bad for the bottom line,” said.

“Markets are demanding clean energy, and no amount of rhetoric from Donald Trump will be able to stop the fall of coal in the US and across the globe.”

At a rally in Louisville, Kentucky, the US President announced he was going to take action to boost coal production, which was a theme he reiterated throughout his election campaign.

“As we speak we are preparing new executive actions to save our coal industry and to save our wonderful coal miners from continuing to be put out of work,” he said.

Paul Massara was once the chief executive of Big Six energy firm RWE npower, but now has the same role at renewable firm North Star Solar.

He described the decline in new coal plants in Asian countries as “truly dramatic”.

“[It] shows how a perfect storm of factors are simply making coal a bad investment,” Mr Massara said.

“Growing awareness of the air pollution problems coal causes, the impact of policies to tackle climate change, and the rapid growth and cost-competitiveness of renewable sources of energy, along with emerging battery technologies, are making new coal plants redundant before they are even built.

“For us in Britain, there are two clear messages from this report. One is that the Government’s decision to phase out coal power is, far from being a risky move, actually putting us ahead of the pack in moving away from the dirtiest form of energy.

“Secondly, it should challenge Germany and other Western nations who still rely on coal to adopt a faster timescale to close existing plants.

“It also highlights that those claiming that it is pointless, our taking action to tackle climate change because Asian countries are still building coal stations, are increasingly wrong.”

However Benjamin Sporton, who runs the World Coal Association, suggested that anyone who thought the coal industry was on its last legs was mistaken.

“China has been a remarkable example of the role that affordable coal can play in improving access to energy and supporting economic development – the country has achieved universal energy access so has no need for a new coal station being built every week,” he said.

“Yes, China, is reducing the number of coal-stations but not because it’s transitioning away from coal, instead the new dynamics is a signal of a more developed economy.”

He said China’s promises about cutting emissions to date implied coal would “continue to be central to its energy solutions albeit through efficiencies including the use of new coal technologies”.

And, in India’s case, he said it was “simply not true that renewables are displacing coal”.

“For these countries excluding coal from the energy mix is not an option – it is essential for economic growth and critical in securing energy access,” Mr Sporton said.

James Thornton, chief executive of environmental lawyers group ClientEarth, said: “Even with plummeting coal use, emissions from plants currently operating or under development will take us beyond Paris’s 1.5C warming limit.

“In Europe alone, hundreds of plants will need to close between now and 2030 to meet this target.

“Coal’s demise is inevitable – there is no point waiting until the bitter end. We need to phase out coal at speed.

“Countries must get ahead of the game and put their phaseout ambitions into law. Governments should implement strict policies to retire their oldest and dirtiest coal plants first, and ensure appropriate support for workers moving on from the coal industry.”