Wimbledon is hoping to cut down on the amount of plastic waste generated at this year’s tennis championships. 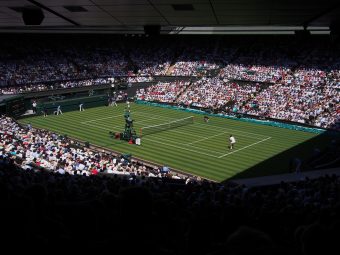 One big change is that all of the water bottles sold and given out at the two-week long tournament will be made from 100% recycled plastic that can be recycled once fans are done with them.

Tournament water sponsor Evian says it plans to make all of its bottles out of 100% recycled plastic by 2025. The company said it hopes to sell about 420,000 bottles of water at this year’s tournament, which runs from July 1 to 14.

Spectators are also allowed to bring their own reusable water bottles and organizers say there are more than 100 fountains and water refill stations on the grounds.

Organizers say that cutlery and most of the drink cups used during Wimbledon are made from 100% recycled material and the containers used for their famous strawberries and cream are made from 70% recycled plastic.

They sell an average of 166,055 portions of strawberries and cream each year.

There will also be employees encouraging sustainability and making sure people throw their recycling in the right bins.

Wimbledon has also stopped putting players’ freshly-restrung rackets into plastic bags, which means 4,500 fewer bags will be used during the tournament.

In June, the All England Lawn Tennis Club (AELTC) signed on to the UN Sports for Climate Action Framework.

“We believe that Wimbledon, along with other major events, has a vital role to play in helping to protect the environment, today and for the future, and we are proud to be a signatory to the UN Sports for Climate Action Framework,” said AELTC Chief Executive Richard Lewis in a statement.

Organizers of Glastonbury, the huge UK music festival that wrapped up on June 30, banned single-use plastic bottles at the five-day event and sold sandwiches in 100% compostable packaging.

The European Parliament voted in March to ban a variety of single-use plastic items, including straws and cutlery, by 2021.