After four weeks of fanfare, the 2018 World Cup has come to a close. France’s victory in Sunday’s final marked the end of a summer filled with thrilling victories, surprise defeats, national pride (and disappointment), penalty kick-induced panic and many other emotions associated with soccer. 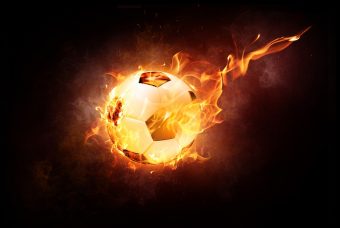 Fans, unfortunately, will have to wait longer than usual to experience it all over again. That’s because the next FIFA World Cup in 2022 will be held in winter, not summer, due to the sweltering climate of the next host country, Qatar.

Located on the Persian Gulf, Qatar sees an average high temperature of 108 degrees F in the summer, and temperatures close to 123 degrees F have been recorded in the capital Doha. For a sport that requires players to run continually for 90 minutes, this poses a huge health hazard. And even without the physical strain of playing soccer at the highest level, extreme heat threatens significant health problems, including dehydration, exhaustion and stroke.

Past sporting events demonstrate the danger of extreme heat. The 2014 Australian Open continued play through temperatures of 108 degrees F, which caused the Canada’s Frank Dancevic to grow faint and hallucinate, seeing the cartoon character Snoopy. Dancevic later said that it was “inhumane” to make competitors play tennis in that heat.

Due to the dangers associated with extreme heat, FIFA’s executive committee decided to move the 2022 World Cup from its typical June to July timeframe to late November and December, when high temperatures reach above 80 degrees F. This forces soccer fans to wait an additional six months to see their team on the world stage, but it will be significantly safer for players who take part in the tournament.

A winter tournament is particularly important given the effect of climate change. Qatar is likely to be warmer in 2022 than it is today, and research has shown that in the Middle East, unlike the rest of the world, temperatures are rising faster in the summer than in the winter. Each year, the region sees a new heat record broken. On June 26, Quriyat, Oman set a stunning record for highest low temperature. That day, the mercury did not fall below 108.7 degrees F. If global warming continues at its current pace, scientists project that, by 2100, the Arabian peninsula and surrounding areas could be too hot and humid for humans to survive outdoors.

Qatar organizers are fully aware of the heat concerns, not just for the players but for millions of expected visiting fans as well. In May 2017, the country finished construction of Khalifa International Stadium, its first World Cup stadium and the world’s largest air-conditioned open-air arena. The advanced cooling technology will keep the field and stands around 79 degrees F.

While prioritizing the health of players and fans, organizers have neglected to safeguard construction workers, who are building stadiums, hotels and other infrastructure ahead of 2022. Following reports of hundreds of migrant laborers in Qatar dying as result of working long hours in extreme heat, including many working on World Cup buildings, critics called on organizers to instate better labor protections. Human Rights Watch Middle East director Sarah Leah Whitson said that “as Qatar scales up its FIFA World Cup construction projects, authorities need to scale up transparency about worker deaths that could be heat related, and take urgent steps to end risks to workers from heat.”

Organizers’ apparent disregard for hot, humid working conditions fits a pattern of systematic abuse and exploitation, according to Amnesty International. “My life here is like a prison,” a worker from Nepal told the organization. “The work is difficult, we worked for many hours in the hot sun.”

Unfortunately, the sweltering temperatures making life difficult in Qatar today will only get worse in the years ahead. Climate change is making the world hotter by the day, with consequences for athletes, fans and, in particular, workers, who have to contend with extreme heat.