Forest elephant extinction would exacerbate climate change. That’s according to a new study in Nature Geoscience which links feeding by elephants with an increase in the amount of carbon that forests are able to store.

The bad news is that African forest elephants – smaller and more vulnerable relatives of the better known African bush elephant – are fast going extinct. If we allow their ongoing extermination to continue, we will be also worsening climate change. The good news is that if we protect and conserve these elephants, we will simultaneously fight climate change. 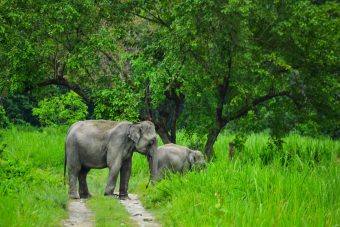 Elephants are fascinating animals, and I have studied them for more than 15 years. They are intelligent, sentient, and highly social. But their single most remarkable feature is their size. Evolutionarily, elephants gambled on becoming massive enough to deter predators like lions and tigers.

In exchange, they became slaves to their appetite. Elephants need huge amounts of food everyday, something like 5-10% of their body mass. A typical three-tonne female could eat 200 kg of plant material in one day. Her family may need to consume more than a tonne of food per day.

It is not easy to find so much food, especially in tropical rain forests, where plants have high concentrations of chemical defences (toxins) to avoid being eaten. Elephants spend most of their life eating and looking for food. We can think of them as “eating machines”. African forest elephants are particularly fond of saplings, young trees, and the plants that first grow into newly opened gaps in the forest. These “early succession” plants are specialised in growing fast following a disturbance and they invest less in chemical defences. Early succession trees also have lower wood density than slow-growing late-succession tree species.

Elephant eating manners are also remarkable. They feed by breaking stems and branches, pulling down lianas, uprooting whole plants, stripping leaves off twigs, and so on. It is easy to notice their presence because of the mess they leave behind.

The key novelty of the new study, by the ecologist Fabio Berzaghi and colleagues, is they include, for the first time, the effect of elephant feeding disturbances in a computer modelthat simulates demographic processes in forest ecosystems. They found that “elephant disturbance” – all that messy eating – results in forests having fewer, larger trees. Elephants filter out small early-succession (i.e. low wood density) trees, promoting the dominance of late-succession (high wood density) trees, which ultimately leads to long-term increases in the total biomass. Berzaghi and colleagues were able to validate their model predictions with data from real forest plots in the Congo Basin.

By promoting these larger, woodier trees, elephant feeding disturbances therefore mean the forest stores more carbon. These results have important and far reaching implications for elephant conservation and carbon policy. The authors estimate that the disappearance of African forest elephants would result in a loss of as much as 7% of the carbon stocks in Central African forests, which they valued at around US$43 billion, based on a conservative carbon stock price. In short, forest elephants are our allies in the fight against climate change and their existence saves us tens of billions of dollars in climate responses.

The situation of African forest elephants is particularly dramatic. Once numbered in the millions, their population is now less than 10% of its potential size and, in the decade from 2002 to 2011, as many as 62% of forest elephants might have been killed. This decline is mostly due to poaching to feed Asian demand for ivory as well as increasing human encroaching of their habitats. What a sad reason for a massacre and an ecological disaster.

Scientists largely recognise African bush (Loxodonta africana) and forest (L. cyclotis) elephants as different species. However because of practical challenges (such as dealing with abundant hybrid populations), the International Union for the Conservation of Nature (IUCN), which officially tracks endangered species, has kept the two together. The problem is that the more populous bush elephants have masked a drastic reduction in their forest cousins.

Berzaghi and colleagues emphasise the need for forest elephants to be finally acknowledged as their own species. This would give them a separate IUCN Red List status – probably marked as “endangered” – and trigger important policies and actions.

Berzaghi and colleagues show that forest elephants produce ecosystem services in the form of climate stability from which we all benefit, including people like you and me who might never visit the forests of Central Africa. If we are all beneficiaries of elephant conservation, we should be also responsible for it. It is very important that more affluent societies assume a bigger share of the responsibility to conserve the elephants and other tropical biodiversity from which we benefit.

In the past decade we have learned a lot about how important elephants and other large animals are for functioning ecosystems. It is time to apply this knowledge. Berzaghi and colleagues produced evidence linking the behaviour of a single species – feeding disturbances by African forest elephants – to global-scale climatic impacts. As mentioned earlier, the bad news is that we humans are killing elephants and ruining our planet. The good news is that we could synergise efforts and fight climate change by effectively protecting and restoring forest elephant populations and their habitats. The choice seems obvious to me.