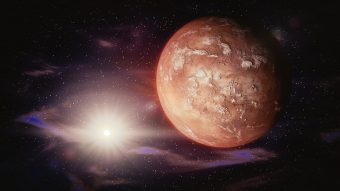 Getting there takes seven months, and landing on a surface where the average temperature is about -60°C involves “seven minutes of terror.”

Despite the obstacles, active exploration of Mars has ramped up of late – pushing scientific discovery forward and potentially inching us closer to human habitation. The United Arab Emirates inserted a probe into Martian orbit earlier this month, the US followed with a NASA rover landing, and China has its own probe orbiting the Red Planet in anticipation of landing a rover in May.

One reason for the cluster of missions is that Mars was relatively close due to the planetary alignment last year, presenting a limited launch window. And there’s perhaps never been a better time to establish space prowess as a measure of broader ambitions. A handful of countries and regions have now successfully reached Mars, including India, Europe (the European Space Agency) and the Soviet Union.

The current round of exploration is expected to include several breakthroughs. NASA’s Perseverance rover is collecting Mars rocks for analysis for the first time, and it’s equipped with a microphone giving us our first listen to sounds from our neighbouring planet.

Mars has become such a popular destination that debris is starting to accumulate. In one case, a European Space Agency lander presumed to have crashed after going incommunicado in 2003 was spotted on the surface by an American orbiter more than a decade later, safely perched in icy silence.

The history of Mars exploration is riddled with failure. In the 1990s four out of NASA’s six Mars missions were lost, including a $125 million orbiter after engineers neglected to convert from English to metric measurements. Russia, Japan, and China have also suffered disheartening setbacks.

The redoubled efforts to reach Mars despite our spotty shared track record speaks to the potential rewards. In a geopolitical sense, the more that can be learned about the planet, the more it can be put to strategic use. China’s current mission is a sign of heightened ambition; it’s expected to use ice-mapping technology to glean new insights into a planet that is in some ways similar to ours, and in others a ghostly opposite.

We’ve come a long way from the days of 19th century Italian astronomer Giovanni Schiaparelli, whose Martian maps drawn on a Milan rooftop demonstrated questionable topographic certainty and sparked a belief in canals built by an alien civilization – but also gave us lasting place names.

Photo: Public domain via Wikimedia Commons Atlas of Mars by Giovanni Schiaparelli, made in 1888.

On the Strategic Intelligence platform, you can find feeds of expert analysis related to Space, Geopolitics and hundreds of additional topics. You’ll need to register to view.