California is currently in the grips of its deadliest wildfire while two others rage, in what has been its worst wildfire year on record. 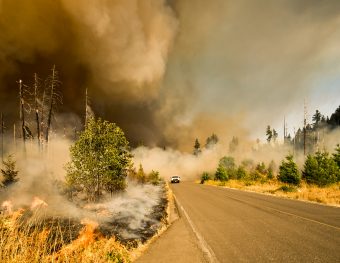 The Camp wildfire in the north of the US state has burned through more than 50,000 hectares and is the most deadly in California’s history.

The Camp fire has achieved the grim milestone of breaking an 85 year-old record, having already surpassed the 31 deaths recorded in the 1933 Griffith Park wildfire.

Further south, two wildfires near Los Angeles – the Woolsey fire and Hill fire – continue to blaze, tearing through neighbourhoods in Malibu and Calabasas.

These three wildfires combined have forced more 300,000 people from their homes across California.

This mass evacuation and the deadly nature of the Camp wildfire is partly due to California’s huge population growth: there are now 40 million people living in the state, double the number in 1970.

And many more are living in wildfire-prone areas. According to research published earlier this year, the total number of homes and land developed in areas of the US prone to wildfire has increased by nearly 1350% since 1940.

Wildfires have always been part of California and several other US states’ natural ecology.

However, while significant population growth can help explain rising death tolls, it cannot address the growing severity and frequency of wildfires.

This year the US has not only suffered its most deadly wildfire with the Camp fire; it has also suffered from the biggest wildfire in its history.

California’s seven biggest wildfires ever have all occurred since 2003, with 12 of the 15 biggest fires occurring within this period too.

The Californian state government itself links the increasing size and frequency of wildfires with climate change, estimating that the average area burned statewide by wildfires could increase by 77% by 2100.

Other research says the acreage in California suffering from wildfires could increase by up to 150% by 2039 due to climate change, with wildfires across the US as a whole increasing by 500%.