Scientists at Dartmouth College engage in climate change research have found a way to determine what the carbon dioxide level was in the Earth’s atmosphere during the early Eocene period that began about 60 million years ago and ended about 40 million years ago. During the Eocene, global average temperatures were 10º Celsius higher than today.

The early Eocene was characterized by five periods of extreme warmth — known as hyperthermals. They occurred between 56 and 52 million years ago and featured average temperatures that were up to 8º C warmer still. Add 10 degrees and 8 degrees and you get temperatures that were 18º C hotter than today, which equates to 32º Fahrenheit. If it is 70 degrees F where you are today, imagine it is 102 degrees outside instead. Big difference, right?

Until now, the scientific community believed that carbon dioxide levels were as high as 2000 parts per million during the Eocene era. But the research done by the Dartmouth scientists suggests carbon dioxide levels at the time were only half that high — about 1000 ppm. Today, CO2 levels in the atmosphere are around 400 ppm. The message is, disastrous consequences can flow from much lower concentrations of carbon dioxide than previously thought.

“This research provides important information about the planet’s climate past and adds an important chapter to the Earth’s history book,” said Ying Cui, Obering Postdoctoral Fellow at Dartmouth College. The research into a period of known high temperatures will help scientists understand how the earth has responded to changes in carbon dioxide levels in the past. That information should assist them in refining their predictions for climate change in the future.

The researchers used data regarding concentrations of carbon 12 and carbon 13 isotopes derived from sediment samples found in terrestrial and deep-sea drilling sites. The question the wanted to answer was where did the extra carbon dioxide that raised the earth’s temperature so high come from? The answer appears to melting permafrost during the period studied.

Uh, oh. Houston we have a problem. Permafrost melting is occurring right now this very moment in northern Canada and Siberia. As Bill McKibben explains in his book Oil And Honey, once the permafrost begins to melt, it begins a cascading feedback loop leading to climate catastrophe. Melting releases more carbon dioxide with warms the earth more and causes more melting. Lather, rinse, repeat.

“This changes our understanding of what the concentration of carbon dioxide should be in relationship to global temperature as well as how we should revisit climate models in order to better project future climate change,” Cui says. “The challenge is to reconstruct what the past carbon dioxide concentration is and to utilize these geochemistry proxies the best we can — essentially, how can we best interpret these records using geological archives,” said Cui.

While the Dartmouth research finds that the carbon was most likely released by permafrost thaw, there is still question as to what triggered the warming that caused the release of extra carbon into the atmosphere. Separate research points to the roles of extreme volcanic activity and water vapor during Earth’s earlier warming periods.

Although focusing on a timeframe that is over 50 million years ago, Cui says the research relates directly to efforts to understand the Earth’s current warming trend, and to project how human activities and other natural dynamics could impact future warming.

“The geologic past can provide a useful insight into our understanding of current and future environmental change,” said Cui. “Policy makers, economists and others who study projections on temperature can utilize this information to see how ecosystems recover after rapid change of climate and use it as lessons for the future.”

Of course, if you are one of those people, like Vice President Mike Pence, who believe the Earth is only 7,000 years old and that humans and dinosaurs coexisted at one time, none of this matters. The idea that anything happened 60 million years ago is to absurd to even consider. Which is why humanity will likely miss its last best chance to avoid extinction. 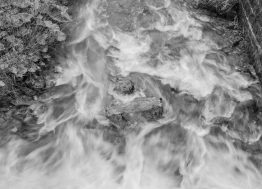