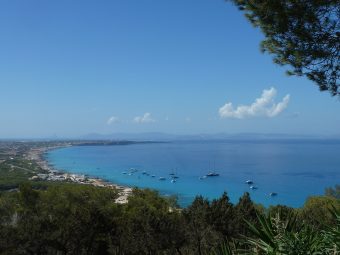 The tiny Mediterranean island of Formentera has taken delivery of six electric cars as part of an ambitious plan to be the first island in Europe to banish traditional cars from its shores.

At 12 miles (19km) from end-to-end and with a population of about 12,000, Formentera is the smallest of Spain’s Balearic Islands. In summer, however, 15,000 cars are in circulation, arriving by ferry or rented on the island.

The six e-Mehari cars were donated by Citroën as part of a pilot scheme for transport on the island to be all electric, although no target date has been set. As the distances are short, the e-Mehari’s range of 124 miles is not an issue.

The first stage consists of offering hotels and tourist apartments tax incentives to install charging points, as there are only 14 on the island. However, with 16 charging points per million people in the rest of Spain this is much higher than average.

Officials say that 200 businesses associated with tourism have already shown an interest in installing charging points against tax breaks.

The tourism department is encouraging hotels to hire out electric cars to customers as an extra service. It estimates that within two years this would triple the number of charging points.

“Formentera is working to maintain its characteristic landscape and peacefulness,” the island’s tourism minister Alejandra Ferrer said. “We’ve been discussing this for years with residents and with tourist organisations. The electric car is key to eliminating air pollution and cutting down on noise.”

Citroën has donated the cars, which cost around €25,000, for hoteliers to try them out. They are working on agreements with hotels and car rental companies to sell e-Meharis at a discount.

The plastic-bodied e-Mehari (which means Arabian camel in Arabic ) is based on the old petrol version designed by a French fighter pilot which Citroën produced from 1968 to 1988. The island has always had a special fondness for this car and there are still 147 of the old type Meharis on Formentera.

The sales of hybrid and electric cars in Spain are rising rapidly, spurred by government incentives. The Spanish carmakers association says they now represent 2.5% of the market, with some 13,000 vehicles now registered.