Much of the planet’s megafauna is being driven extinct because of the usual causes: habitat loss and rampant poaching for body parts like horns, bones and tusks. 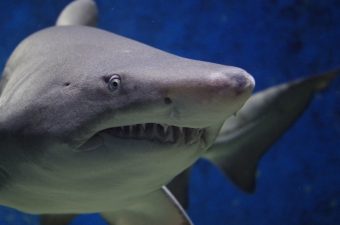 But there is another reason large vertebrates are going extinct: people keep on eating them.

A team of researchers has analyzed how human activities are impacting populations of megafauna within six classes: mammals, ray‐finned fish, cartilaginous fish, amphibians, birds, and reptiles. Their findings make for sobering reading. Of the 362 megafauna species the researchers have surveyed, a staggering 70% are showing signs that they are decreasing in number while 59% are directly threatened with extinction.

“Surprisingly, direct harvesting of megafauna for human consumption of meat or body parts is the largest individual threat to each of the classes examined, and a threat for 98% (159/162) of threatened species with threat data available,” they explain.

In many countries bushmeat is a large part of local diets. In some countries like Cambodia and Malaysia there are even restaurants that specialize in bushmeat. Their business model often involves the poaching of protected and endangered species to be served to diners at higher prices.

Meanwhile, other animals like pangolins and sharks are widely consumed because their meat or parts like fins are considered to be exotic delicacies. Yet other large animal species like tigers and rhinos are at risk of being driven extinct because their body parts are prized in traditional Chinese medicine.

“Maintaining biodiversity is crucial to ecosystem structure and function, but it is compromised by population declines and geographic range losses that have left roughly one fifth of the world’s vertebrate species threatened with extinction,” the authors write. “Therefore, minimizing the direct killing of the world’s largest vertebrates is a priority conservation strategy that might save many of these iconic species and the functions and services they provide.”

The phenomenon of people hunting and eating large animals into extinction is hardly new. Even at the dawn of human history people made an ecological mark by driving several species of large animals into extinction (from giant ground sloths to giant monitor lizards to giant birds) soon after they’d arrived in new lands from Australia to the Americas.

Large animals are especially at threat from human hunters because they usually bear few offspring, which take a long time to reach full maturity. If they are killed in large enough numbers within a short period of time, they may never recover. “Megafauna species are more threatened and have a higher percentage of decreasing populations than all the rest of the vertebrate species together,” says William Ripple, a professor of ecology at the Oregon State University College of Forestry who led the research.

In the past 250 years 9 megafauna species have gone extinct either entirely or in all their wild habitats, including two species of giant tortoise and two species of deer. At especial risk of imminent extinction right now is the Chinese giant salamander, which is considered a delicacy in Asia.

“In addition to intentional harvesting, a lot of land animals get accidentally caught in snares and traps, and the same is true of gillnets, trawls and longlines in aquatic systems. And there’s also habitat degradation to contend with. ” Ripple notes. “When taken together,” he adds, “these threats can have major negative cumulative effects on vertebrate species.”