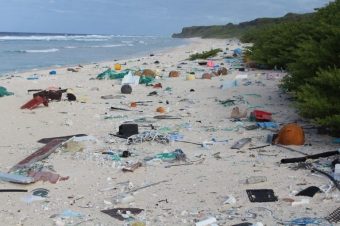 A team in this year’s Volvo Ocean Race is dedicated to raising global awareness of danger posed by ocean plastic. The Volvo Ocean Race is one of the premier sailing competitions in the world. The course is more than 40,000 miles long and takes 9 months to complete. All of the energy needed to compete comes from two renewable sources — wind and muscles. The boats and sails are all identical, which makes the competition all about skill and endurance, rather than equipment.

The boats are equipped with a Volvo Penta marine engine which provides power for low-speed maneuvering while in port. It also powers a desalination system that makes fresh water for the crew members and allows then to reconstitute the freeze-dried food they carry on board. It is forbidden to use the engine for propulsion during the competition.

Given sufficient wind, the boats are capable of sustained speeds of 25 knots or more. They can sail in winds up to 60 knots — more than 65 miles per hour. With seas crashing over the bow most of the time, competing in the Volvo Ocean Race has been compared to “sailing into a fire hose.” The conditions, once under way, are rigorous by any measure.

In the last race, an all-female crew sponsored by SCA, a global manufacturer of sustainable paper products, was one of the eight teams in the race. Team SCA actually won one of the legs of that race. This year, a team composed of half men and half women will compete under the name of “Turn The Tide On Plastic.”

Headed by Dee Caffari, a veteran of the Team SCA campaign, the team is focused on raising awareness about the global threat of ocean plastic. It is supported in part by the Mirpuri Foundation and the Ocean Family Foundation, two groups deeply committed to preserving the oceans from further pollution by plastics. Ocean plastic was the subject of the UN Oceans Conference held in New York during the first week of June.

The Mirpuri Foundation was established by Paulo Mirpuri, a prominent Portuguese businessman, to help educate people about the dangers faced by the world’s oceans from human pollution and create a strong offshore legacy for future generations of Portuguese sailors. Caffari will include two other Portuguese sailors in her crew and intends to compete with an all-Portuguese crew in the future.

“We feel immense pride to be backing this incredible ocean health campaign which we are sure will provide a great contribution to the health of our wonderful blue planet,” says Mirpuri. “We must act immediately if the next generation is to inherit seas and oceans which resemble those that we knew as children.

“In Portugal, we have long held a rich maritime heritage, and this youth-orientated campaign is a major step towards shaping the world-class future of Portuguese offshore racing. The Mirpuri Foundation looks forward to working closely with the Volvo Ocean Race to achieve that objective over the coming years.”

Ocean plastic is not some mere annoyance. It is a scourge that endangers many of the creatures who live in the sea. Recently, British researchers found that remote Henderson Island — 500 miles from shipping lanes and visited by humans only every 5 years or so — is littered with more than 38 million pieces of plastic that have washed ashore.

Other researchers have found the amount of plastic trash on the bottom of the Arctic Ocean has increased 20 fold in just the past decade. In the last Volvo Ocean Race, which ended two years ago, the sailors reported they could see the increase in the amount of plastic debris infesting the waters they were sailing through with the naked eye.

“The Ocean Family Foundation is delighted to be supporting this exceptional campaign to support ocean conservation and clean-up,” said spokesperson Peter Dubens. “Plastic pollution has emerged as one of the greatest challenges facing our globe, with plastic debris forecast to double over this decade, causing huge damage to our oceans as well as to humans. With her public profile as a British world record-holding athlete, Dee Caffari is the perfect leader to raise awareness of the need for urgent action.”

Caffari says, “It’s an honour to represent this landmark campaign, and to lead the team on such a prestigious platform is exciting. Seeing the amount of plastic in the ocean is heartbreaking. We’re abusing our planet and this campaign is about pushing people to proactively do something about it. We will be sailing with a youth-orientated team because the reality is, it’s going to be the next generations who inherit the mess that we’re making now. This is a major issue and we need to encourage this generation, and future generations, to step up.”