A few weeks back, Tennessee’s Chattanooga Metropolitan Airport (CMA) became the first US airport powered by 100% solar energy. For the fact keepers, the world’s first airport to go completely solar was the Cochin International Airport (CIAL) in Kochi, India. 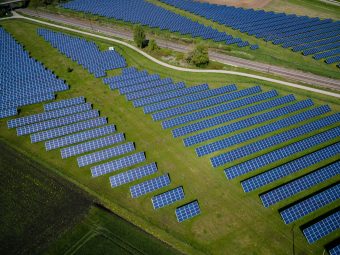 The current feat was achieved by CMA in three phases over a period of eight years. It now boasts of a capacity of a 2.64 MW ground-mount solar power system.

The blue sea of solar panels is located in the southwest corner of the airfield on land which is otherwise unusable for aviation purposes. Here are the coordinates if you want to dive into it! Remember to switch to the satellite mode and adjust the zoom/resolution level if you have to.

Interestingly, back in 1969, Chattanooga, Tennessee’s fourth-largest city, was declared to be the dirtiest in the United States due to high levels of ozone, particulates and other toxic substances in the local air.

Fifty years fast forward, the city has been proactively going green and was recently chosen by Volkswagen to setup a new EV manufacturing plant.

In fact, Chattanooga Lookouts recently announced that they will become the first minor league baseball team in the US to play a game that is 100% carbon neutral. Their home game against Montgomery on August 23, 2019, will be powered through locally-generated solar energy credits provided by the Tennessee Valley Authority (TVA) and the local power company EPB.

To celebrate this historic partnership, the Lookouts will be donning special green jerseys during the game. How cool is that!

Back to US’ first solar airport, CMA has made available a publicly accessible dashboard to track the power generated from its solar farms. You can check it out at this link.

Construction of the first phase of the solar farm started back in 2011 with the installation of 1 MW solar PV capacity. On the completion of the second phase of 1.1 MW in 2013 the airport was able to meet 85% of its power needs by itself. With the final phase now completed the airport can run on 100% solar energy.

Built at a cost of US$10 million, as per reports, the microgrid system also has battery storage units (though I am guessing it is not a full backup) which will allow operations to continue after sundown.

CMA counts TVA and EPB to be important partners in its bid to go solar. The electricity from the solar farm will be sold to TVA and CMA will receive reduced utility bills from EPB.

The savings from utility bills are expected to payback for the solar system under a period of 20 years. CMA expects the solar farm will last between 30 and 40 years.

Apart from the distinction of being the first completely solar powered airport in the US, the Chattanooga airport has probably also became carbon-neutral. An article on its website, however, pegs a requirement of 3 MW solar capacity for the second target.

The solar farm was funded through a Federal Aviation Administration (FAA) Voluntary Airport Low Emission (VALE) Grant which aims to improve airport air quality. In fact, for the first phase as much as 95 per cent of the installation cost was covered by federal funding.

Beyond solar power, CMA has been taking a number of steps to become more sustainable. Among other initiatives like energy efficiency measures and asphalt recycling, it has also been working towards LEED certification for all new construction projects.

Back in 2015, India’s Cochin International Airport Limited (CIAL) at Kochi, Kerala, became the world’s first 100% solar powered airport. Since then the solar capacity at CIAL has grown from the then 13.1 MW to about 40 MW. There were however news reports that some of this capacity would be reduced.

CIAL further one upped its game by using the land covered by its solar panels for the cultivation of organic fruits and vegetables. In 2018, the airport reported an yield of over 80 tons!

Surprisingly, apart from generating additional revenues (the produce is sold at the arrivals section of the airport itself), this has a number of additional benefits. Not only do the plants help keep the solar panels dust free, but it also saves the cost of de-weeding the land.

Water efficient drip irrigation is used to grow a variety of produce in over 45 acres of land which is otherwise mostly covered with solar panels. Even the water used to clean the panels (detergent free) is channeled back to irrigate the plants. To some extent the plants help increase the efficiency of the solar panels by reducing the ambient temperature.