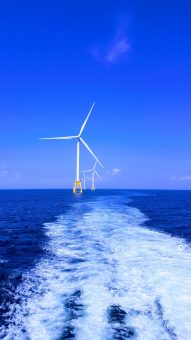 The Biden administration has just set a goal of 30.000 megawatts of US offshore wind by 2030. and that’s got me thinking about the pieces that need to come together to make that possible. And there sure are a lot of them. The good news is that there’s positive movement with a whole lot of those pieces.

In terms of what it’ll take to get to 30.000 megawatts (MW) as fast as possible, here’s what I’m thinking about: Robust demand for those clean electrons. A solid leasing and permitting process to allow good project proposals to proceed. Solid infrastructure to get parts, people, and power where they need to be. Continued technological innovation for even greater affordability and efficiency. And an approach that does right by people from start to finish.

The Biden administration’s effort is a multi-pronged push to “jumpstart” offshore wind in the US, with the push at the federal level involving the Departments of Interior, Energy, Commerce, and Transportation, plus members of the administration’s climate team. That’s important.

But there’s also a whole lot that needs to happen at local and regional levels, and a lot that already is. Here’s how things look in a few key areas.

Demand for offshore wind: States in the lead

Surprising to say, but demand is increasingly seeming like the easy part of all this, thanks to incredible state leadership. Starting with commitments like Massachusetts’s in 2016. (1.600 MW of offshore wind by 2030.), states have been outdoing each other over and over to attract offshore wind. They’re doing that for not just the megawatt-hours of clean electricity that offshore wind offers, but all the job creation, economic development, and increasingly attractive prices that come with it. (And there’s this breaking news: a new Massachusetts climate law ups that state’s offshore wind target yet again.)

The 30.000 MW in the new Biden plan are approximately what state commitments — statutory requirements, actual contracts, or both — add up to. But getting all that offshore wind installed by 2030. will require even faster progress than envisioned in some of those states.

The where and how: Offshore wind leasing and permitting

Part of getting there quickly and sensibly is making sure we have well thought-out places to put the turbines. The administration’s announcement includes a commitment to move toward identifying a new offshore wind leasing area in the waters off Long Island and New Jersey, to help in meeting the Tri-State area’s clean power needs.

Another piece is making sure that proposed projects are well designed, and avoid, minimize, and compensate for (in that order) harms. The federal government’s role in that includes conducting timely and thorough environmental reviews, and we were encouraged by the release earlier this month of the final environmental impact statement for the first large-scale US offshore wind farm, and progress in reviewing a second.

This week’s announcement includes the next steps in the environmental review of the next big offshore wind project in the queue, an expectation of starting the reviews of up to 10 more this year, and 16 completed reviews by 2025. It also mentions protecting biodiversity and “partnering with industry on data-sharing … to fill gaps in ocean science areas.”

Offshore wind infrastructure: If we build it, they will come

Part of creating a welcoming environment for offshore wind is getting the infrastructure in place, and there are lots of dimensions to that.

There’s also the tantalizing prospect of manufacturing. US-made components may start with pieces like the foundations and cabling, but there’s a lot of value in fabricating the big components close to project sites once the scale of activity is large enough.