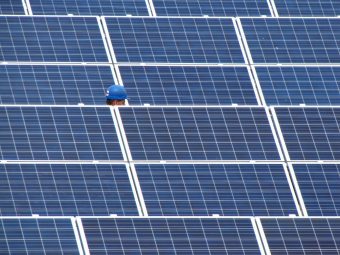 One production plant has saved almost half of the electricity consumption in the day of the largest production thanks to the solar power plant on the roof of the facility. Out of 950 kWh consumed, it saved about 450.

The construction of a small solar power plant with the installed capacity of 50 kW in Simanovci with the connection to the cabinet for consumption was entrusted to the Belgrade-based company MT-Komex. The amount of produced energy from accumulated solar radiation is used exclusively for their own consumption. The photovoltaic power plant in Simanovci supplies the user with clean energy, and at the same time reduces the monthly electricity bill.

The rooftop structure carries 180 panels of 275 Wp which are set at an angle of 10°. In order to transform the DC to AC, three Fronius inverters were installed: two of 20 kW and one of 8.2 kW.

Experienced installers of MT-Komex have mounted a system of aluminium construction of the K2 Systems manufacturer from Germany, one of the leaders in the production of aluminium systems for rooftop structures. Due to the specificity of the location, they chose a system that reduces the influence of wind, thus reducing the need to use additional load in the form of concrete slabs which make the construction of solar panels and aluminium rails heavier. In this way, the risk of wind pushing the structure along on the roof and taking it off the roof with all the panels was averted.

The solar power plant was put into operation in mid-March. Even though April was marked by bad weather and abundant precipitation which are not characteristic for this time of year, the solar power plant has produced enough electrical energy to reduce almost 30 per cent of the electricity consumption to the cabinet for consumption in the production plant on whose roof a solar power plant is installed. In some cases, when days are sunny, no precipitation, this amount of reduction of electricity consumption has reached as much as 50 per cent. One of the sunniest days in the fourth month was April 26th and then the factory had the highest consumption in the facility, given that they had the highest production capacity, which resulted in a total consumption of 950 kWh on that day, and the solar the power plant gave almost 440 hours.

Thanks to solar power plants, MT-Komex customers receive clean and cheaper electricity. Certified engineers and electrical fitters are trained to mount solar power plants almost on any land and any facility, whether it’s a house, a factory, a parking lot or a canopy. So far, they have built 16 solar plants with 10 thousand solar panels with a total installed capacity of 2.6 MW. Behind every project of the power plant construction is 25 years of experience.

IN BRIEF ABOUT SOLAR POWER PLANTS Solar power plants produce “clean” electricity, and they can be rooftop or ground-mounted. The generated electricity from a solar power plant can be used to satisfy own consumption. This clean energy reduces the energy you would pay by taking it from the distribution network, which generates significant savings. Solar power plants can provide 15 to 70 per cent of the electricity of their consumption when there is constant electricity consumption throughout the day. Energy production depends mostly on how to install panels and equipment selection.

This article was published in the new issue of the Energy portal Magazine on ENERGY EFFICIENCY, June 2018. – August 2019.