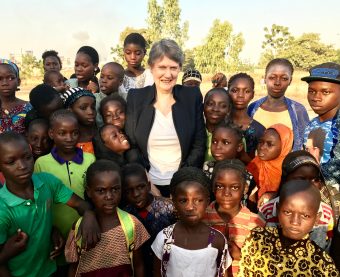 Wrapping up a three-day visit to the country, UNDP Administrator Helen Clark met today with a rural community in Burkina Faso which is bearing the brunt of the effects of environmental degradation and deforestation in a country where scarce water resources leave the population especially vulnerable to even the smallest fluctuations in rainfall.

Lake Dem, in the country’s Central North region, has lost about 40 per cent of its water. The 51,000 inhabitants of the nearby city of Kaya, and the villages around the lake depend on its health for their water supply.

A UNDP project in partnership with the Government of Burkina Faso and with support from the Government of Austria, works with local communities around Lake Dem to address critical issues threatening the lake – including pollution by fertilizers as well as the build up of sand deposits caused by soil erosion. A lake once replete with fish now has none.

Speaking with project participants, Helen Clark commended the grassroots nature of the initiative – noting that the project had come about because of action at the local community level. “You saw what was happening to the lake, and you decided to act. Without the leadership of the communities, projects like this cannot succeed”, she said.

With an initial investment of US$200,000, the project has run pilot schemes to show how ecosystem-based adaptation initiatives can work in practice. At Lake Dem, the project involved the establishment of a local water committee, the development of a land charter, reforestation of the lake’s borders, and action to reduce the sand deposits which threaten to choke the lake.

The visit to Burkina Faso, Helen Clark’s second as UNDP Administrator, also involved discussions with President HE Roch Marc Christian Kaboré, the Prime Minister, Ministers and officials, on the country’s ongoing and future sustainable development. Talks focused particularly on the country’s new national economic and social development plan, ANDES, which was launched in July this year.

“I first came to Burkina Faso six and a half years ago”, Helen Clark told reporters during the visit. “A lot has changed since then.  A political transition has occurred, a comprehensive reform programme is underway, and there is a comprehensive national development plan.”

“These major initiatives will be the basis of discussion with development partners at the conference in Paris in early December. UNDP has been closely involved with the preparation of the new national plan and the preparations for the Paris conference”, she said.

Elsewhere during the visit, Helen Clark joined President HE Roch Marc Christian Kaboré and Ministers in Dori in the north of the country at the launch of a new programme – ‘PADEL’ – which seeks to accelerate and transform local development across the country.