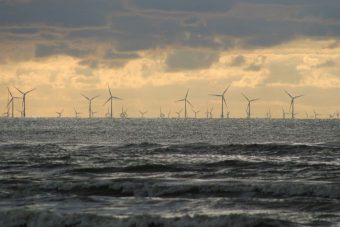 Offshore windfarms could provide cheaper power than Britain’s new wave of nuclear power stations, a leading figure in the wind industry has claimed.

Speaking to the the Guardian, Hugh McNeal, the chief executive of trade body RenewableUK, said he expected that offshore windfarms would secure a deal with the government lower than the £92.50 per megawatt hour agreed with EDF for £18bn Hinkley Point C.

“I wouldn’t be surprised if it [offshore wind] cleared Hinkley prices,” he said of the bidding for a £290m-a-year government subsidy pot in April. The auction is under a scheme known as contracts for difference, which offer generators a guaranteed price for their electricity above the wholesale price. A 35-year deal with EDF was agreed last year.

McNeal, a career civil servant who joined RenewableUK from the now abolished Department of Energy and Climate Change last year, was upbeat about the future of offshore wind.

“I don’t think there’s any doubt about the political commitment of any party, apart from perhaps Ukip, to offshore wind. I think it’s got an incredibly healthy future,” he said.

Construction of offshore and onshore windfarms in the UK was responsible for €12.7bn (£11bn) of investment in 2016, or nearly half the year’s financial activity for new wind power in the EU.

The industry has also been buoyed by recent figures showing the price of offshore wind power had fallen by nearly one-third since 2012 to £100/MWh, a crucial milestone as the government will only continue to subsidise the technology if costs go down.

But McNeal said the decision by ministers to end onshore windfarm subsidies had been hard for the industry. The building of new turbines on land is expected to largely grind to a halt after next year.

Green energy subsidies are paid through energy bills, but MPs said last week that government efforts to communicate the impact on consumers had been “shambolic”. McNeal said he found the focus solely on the cost of new low-carbon power “a little bit odd” given the other factors driving energy price rises.

Three of the UK’s big six energy suppliers have announced price increases as their costs have risen, the bulk of which are higher wholesale prices. “We are perhaps a little bit overexposed to global markets over which we have no control, which fluctuate over time,” McNeal said.

Government officials should do more to spell out all the costs of energy to consumers, he added. The impact of renewable energy subsidies on bills has previously been broken down, but the effect on bills from subsidies to coal power stations for providing backup power, for example, are not.

However, McNeal defended the Conservative party, arguing it was unfairly derided as anti-renewables. “We have to actually just look at what’s been achieved,” he said.

“I’m not saying to you that there isn’t a challenge around the [Conservative] onshore wind manifesto commitment; of course there is. But the record is still a pretty remarkable one.”

Renewable energy supplies one-quarter of Britain’s electricity, he said, compared with a marginal amount before the 2010 general election, when the first of three Conservative-led governments came to power.

McNeal would not be drawn on whether Labour’s energy policy, which is pro-renewables and pro-nuclear, but would ban fracking for shale gas, was credible. But he said questions of energy supply should be depoliticised.

“I don’t think it’s my job to tell any party what its energy policy should be. Let’s just take the heat out of all this,” he said. “I just don’t think it does anyone any good to be in public fighting between different forms of technologies.”

Despite saying last year that new onshore windfarms in England were “very unlikely”, McNeal suggested the technology would come back because it was so cheap. “I don’t think onshore is done at all. I think onshore wind has a terrific future in our country,” he said.

McNeal said he was confident that wind power in the UK would thrive after Brexit, even though the industry’s growth had so far been driven in part by binding EU renewable targets for 2020.

“The idea that we need a separate European package [of support] – that would be the crucial thing that would drive our industry – we don’t need that now,” he said, adding that the sector would win on market terms.