The British chip has been left an inch shorter by the 2018 heatwave, according to a report on the risks to UK fruit and vegetable growing from climate change. 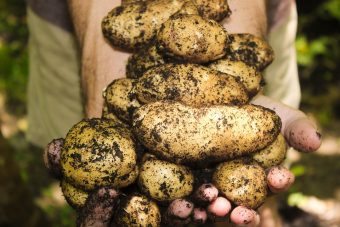 The spell of baking summer weather was made 30 times more likely by global warming and left spuds substantially smaller than usual. Yields of carrots and onions were also sharply down.

Recent years have seen winter deluges cause flooding, severe late frosts and dry summers, all of which make the precarious job of growing fruit and vegetables even harder. Climate change is already making extreme weather more likely and, with projections indicating severe water stress in key parts of England, some growers fear for their future.

The report, Recipe for Disaster, was produced by The Climate Coalition, which brings together 130 organisations including WWF, the National Trust, the Women’s Institute and Christian Aid, and represents more than 15 million UK members. The report calls for urgent reductions of carbon emissions and food waste by, for example, eating more wonky veg.

The summer of 2018 was the joint hottest on record, with some places not seeing any rain for 58 days. The lack of water resulted in the fourth lowest potato harvest in the last 60 years.

“Yields were down 20-25%,” said Richard Thompson, a potato grower in Staffordshire. “We also had quality issues with a lot of misshapen and small potatoes. I’ll be reducing my acreage next year because I can’t afford to take the risk.”

More than 80% of the potatoes eaten in the UK are homegrown, but climate change could make three-quarters of land used unsuitable by 2050, the report found. “It should be unthinkable to us that the humble spud could become a delicacy,” said Gareth Redmond-King, at WWF. “But the unthinkable becomes reality if climate change isn’t tackled.”

Leeds University scientists Kate Sambrook and Prof Piers Forster contributed climate analysis to the report. They found that high temperature extremes in summer and intense winter downpours have become more common in recent decades, with 2013-2014 the wettest winter on record for the UK. Extreme weather will worsen further in future as the world gets hotter, they said.

Warmer winters encourage early flowering of fruit such as apples and wine grapes, but they can then be wiped out by late frosts. Mild winters also mean pests such as the cabbage moth can thrive and could allow the pea beetle to cross the channel from France.

Lee Abbey, head of horticulture at the National Farmers Union, said: “A lot of growers will have come out of [2018] with sore heads and not much income. Farmers and growers are used to dealing with fluctuations in the weather but if we have two or three extreme years in a row it has the potential to put growers out of business.” Carrots yields were down 25% and onions down 40%.

Michael Gove, the environment secretary, said: “This nutritious food, and the livelihoods of the hard-working farmers who grow it, are increasingly threatened by more extreme weather and increased pests and diseases as a result of climate change.” He said the new agriculture bill would reward farmers who reduce their emissions.

“We have to do all we can to limit climate change,” said cook and broadcaster Hugh Fearnley-Whittingstall. “As luck would have it, that is an built-in consequence of sustainable, ethical eating anyway. If you shop locally and eat seasonally you are already doing your bit. If you prioritise organic produce and limit your consumption of animal foods, you’re doing even more.”

Agriculture is a large emitter of greenhouse gases, particularly from cattle. In January, the National Farmers Union set out its aspiration for UK farming to become net zero in its greenhouse gas emissions by 2040.

Other threats to fruit and vegetable supplies in the UK are a lack of pickers after Brexit – currently 99% are from other EU nations – and extreme weather in other places. There were shortages of courgettes, spinach lettuce in early 2017 after bad weather in Spain and Italy.