Earlier this month, a young two-headed Eastern Copperhead was found in Northern Virginia. The finder emailed the Virginia Herpetological Society for identification; DGIF was then alerted and the state herpetologist picked up the snake. This week, he brought it to the Wildlife Center for radiographs. Dr. Ernesto [who is a big fan of venomous snakes] examined the baby copperhead. 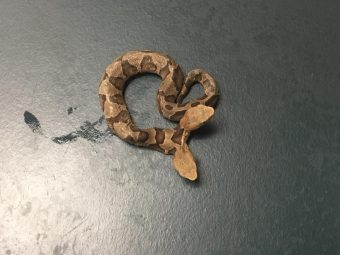 Foto: The Wildlife Center of Virginia

It appears as though the left head is more dominant – it’s generally more active and responsive to stimulus. Radiographs revealed that the two-headed snake has two tracheas [the left one is more developed], two esophaguses [the right one is more developed], and the two heads share one heart and one set of lungs. Based on the anatomy, it would be better for the right head to eat, but it may be a challenge since the left head appears more dominant.

Wild two-headed snakes are extremely rare – they just don’t live that long. The herpetologist will continue monitoring the snake; if it survives, it will likely be placed in an educational facility.

Source: The Wildlife Center of Virginia