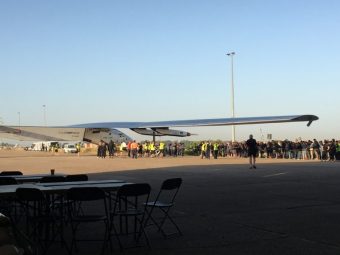 On Thursday, the 23rd of June, Bertrand Piccard and Solar Impulse successfully made a historic, zero-fuel flight across the Atlantic, from New York to Seville, Spain.

The flight comes at a time when reports indicate that transportation is a major culprit when it comes to global greenhouse emissions, and when exhaust fumes continue to send thick smog and fine particle pollution into the atmosphere of some of the world’s major cities.

However, if we take a glass half full approach, we could argue that implementing, on a large scale, technologies that make vehicles more efficient – therefore using less fuel – and promoting electric transport would go a long way to solving the problem. And it isn’t as if these technologies don’t exist. Indeed, ABB has a wide portfolio of products and services already on the market. Government legislation could also see clean transport solutions rapidly adopted on a wide scale. For example, Norway has announced commitments to move to electric vehicles on the road by 2025. Such announcements will stimulate innovation, as manufacturers see the business case for putting in place the products and infrastructure needed to make this huge switch realizable.

Solar Impulse is a very visible ambassador for sustainable transport. Not only does it show that an electric plane can fly for long distances (the flight from Japan to Hawaii took over 117 hours!), it also makes us think about the source of the energy used to power electric vehicles. In the case of Solar Impulse, it is the intermittent energy of the sun which, nevertheless, is used so efficiently that the daylight hours are enough to both keep the plane in the hour and provide enough stored energy to enable it to stay airborne during the night. With ABB’s solar powered charging stations, such as the one inaugurated in Belgium at the beginning of June, EV drivers can feel reassured that the electricity filling their batteries is coming from a clean, renewable source.

Now that Bertrand Piccard and Solar Impulse have arrived in Spain, the team leading the ABB-Solar Impulse innovation and technology alliance will be drawing attention to some of these solutions across Europe. Once the plane begins to head towards the direction of its final destination, Abu Dhabi, we will embark on our own electric transport challenge, proving that we are doing on the ground what Solar Impulse is doing in the air!

A team from ABB Germany will soon embark on their own emission-free journey, also heading from West to East, in an electric car. This EV adventure begins in Seville, will take in France, Italy and Switzerland with Germany the final destination. The electric car will be charged at ABB charging stations, and stop off at ABB sites that are helping to turn transport into part of the solution to a cleaner future, from marine to rail to road.

My next post will include more information about the EV roadtrip adventure, but for now you can follow the latest news and information by going to www.abb.com/betterworld