If the world is going to end, why not have it be for a ridiculous, insane reason?

Like, say, building nuclear power plants on top of a barge and sending it floating up to the Arctic?

Well, that one’s real. If you wanted to panic now, we wouldn’t blame you. 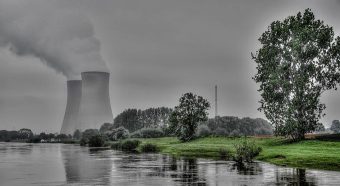 On Saturday, Russia launched Akademik Lomonosov, the world’s first floating nuclear power plant, out of the St. Petersburg shipyard. It’s currently being towed to Murmansk, a port town in northwest Russia, where it will be loaded up with fuel; its destination is a town in the Arctic Circle called Pevek, where it will begin generating power in the Summer of 2019, according to The Independent.

The power plant has no propulsion of its own, but is being towed up North to avoid the steep cost of shipping it by land piece by piece to remote areas. Once it’s there, it will provide electricity to a town of 100,000 people. The Lomonosov will also power oil and gas mining rigs — now that global warming has opened up new shipping routes and access to fossil fuels in what used to be impassable parts of the Arctic, Russia is deploying more resources to take advantage.

Once it arrives, the reactor will replace the Bilibino nuclear power plant and Chaunskaya coal power plant, which were built in 1974 and 1961, respectively. Nuclear power, though cleaner and arguably a better option for our warming planet than the coal plan that Lomonosov will replace, is still a risky business. And put that on a boat, which, unlike a nuclear submarine, is exposed to the weather conditions of the Arctic? It feels risky to say the least. Critics have dubbed the project “floating Chernobyl” and “nuclear Titanic.”

Rosatom, the government-owned Russian energy company that developed the Lomonosov, released a statement saying that the floating reactor will be “invincible” to tsunamis and other natural disasters, and that it has met all the requirements of the International Atomic Energy Agency. The company argues that they have rendered Lomonosov harmless to the environment.

Yet for some reason activist groups, as well as the governments of Norway and Sweden haven’t been reassured that a big-ass, freely-floating nuclear reactor will be safe. The same goes for the oil mining operations, which have a tendency to leak, polluting the delicate (and already threatened) Arctic ecosystem.

The stakes are high, and surely Rosatom has every incentive to get this right — should something go wrong, years of expensive planning and testing go down the toilet, along with any fossil fuel mining operations that the plant would have powered. Oh and, you know, the widespread devastation that would result from a nuclear accident in the already-threatened Arctic ecosystem, and everywhere else the irradiated ocean water may travel.

Fingers crossed everything goes the way Rosatom says it will, and not the way an apocalyptic film might.