As AI-powered drones and self-driving cars slowly come to occupy our cities, a question arises: how will they behave towards the living beings they encounter on the way? While research on human safety has been proliferating, much less attention has been given to the animal kingdom. A new paper in Paladyn Journal of Behavioral Robots explores the issue and suggests some promising ways forward.

The picture of rare drone appearances in public spaces may change drastically within a matter of years as they become providers of numerous delivery services: hot pizzas, emergency medicines, holiday presents or simply anything else below 12-20kg that wants to be transported over short urban distances. But what about birds in the way, say? 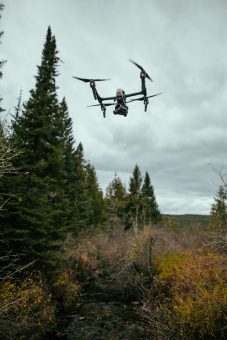 Earlier cautionary tales of birds killed by wind turbines have been met with skepticism by many environmentalists, emphasizing the lives saved over the lost ones: clean energy kills many less birds than climate change. Fair enough, yet will this utilitarian maxim prove further useful as AI-powered machines increasingly populate our public air corridors? Will we further challenge animal welfare for more human convenience?

Oliver Bendel, a researcher from the University of Applied Science and Arts in Switzerland working in the field of machine ethics, highlights an urgent need for animal-friendly machines since the ones currently on the market can easily harm, injure and kill animals without any real need to do so. Decisions AI-powered machines make are based on logical trees imbued with moral reasoning of “yes – no” questions for most situations. Currently those decisions are often limited to whether the object is human or not, as well as to protection of the drone itself.

For a different system to emerge, Bendel suggests that decision trees need to accommodate animals and other living beings as well.

Three general examples he describes are self-driving cars that break when witnessing an animal, vacuum-cleaners that avoid bugs (also think of agricultural and forest harvesters) and camera-drones considering the type of animal to avoid disturbing it. Easier said than done, however, because obstacles are many. For example, researchers have for a while been struggling about decisions regarding passenger vs. pedestrian safety in extreme situations, and when it comes to animals vs. humans our moral reasoning won’t be in their favour.

Complexity also arises out of the changing seasons, shifts between day and night, geographical peculiarities and many other factors that may be impossible to predict due to the ever-evolving nature of the living world, which would require “self-learning systems capable of adjusting to the behavior of animals, and correcting and optimizing their behavior to fit the situation”, says Bendel.

While decision-trees for such uses may actually prove quite simple, developing necessary databases and software may prove costly. When no legislation pushes tech companies to behave ethically towards animals, they might not mind avoiding extra costs on a highly competitive market.

With the increasing automation of human lives and manifold applications of AI for environmental monitoring the amount of interactions between technical and natural worlds shall rise dramatically. Thus, the task of protecting animal lives becomes increasingly pertinent and now is the time for tech companies to take actions in the right direction.