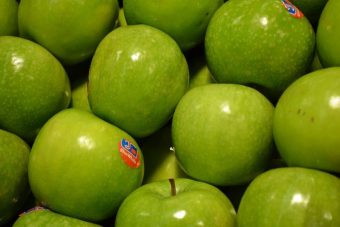 Those little produce stickers are ubiquitous fruits and vegetables everywhere. But, as CBC notes, they’re actually a significant problem despite their small size.

Produce stickers carry price look-up (PLU) codes. PLU codes are decided on by the International Federation for Produce Standards, and are consistent throughout the world. That’s right: The code for a honeycrisp apple is the same in any grocery store, in any country. This is actually sort of impressive! Why? Most produce does not come with packaging—this is a good thing—which means there has to be some way to convey the specific variety of the item to the checkout clerk. Hence, tiny stickers.

Those stickers can be made of various products, though vinyl and plastic are the most common. They’re regulated by most countries as an indirect food additive, meaning that they have to pass certain tests to prove that they’re not dangerous if accidentally consumed. The stickers aren’t supposed to be edible, and they’re definitely not nutritious, but they’re unlikely to cause any bodily damage.

Where they can cause damage is to the environment. People who compost are used to simply throwing their fruit and vegetable waste into the compost bin. That is fine for somewhere like an apple, for which you’d peel off and discard the sticker and discard before eating, composting only the core. But this becomes an issue with items where you don’t eat the skin—say, an avocado, or banana. With these, people are just throwing that whole outside in the compost, sticker included.

There inlies the issue: Produce stickers are a major problem for composting facilities. They don’t break down, and sorting them out from the actually-compostable product is time-consuming and expensive. Being extremely thin and pliable, the stickers pass through screens designed to catch them, and some composting companies single them out as the worst contaminant in their entire chain.

Solutions have been proposed—one company in Sweden laser-etches their avocados—but a more biodegradable solution has not yet been adopted. In the meantime, do your part: PLU stickers in the garbage, produce waste in the compost.