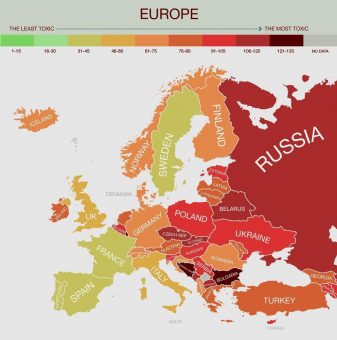 Saudi Arabia and Kuwait have been named the most “toxic” nations on Earth in a new report.

So instead of simply looking at levels of air pollution, the study also focused on the work being done to tackle climate change.

According to the data, Saudi Arabia is one of the world’s largest oil producers but also has some of the world’s lowest renewable energy contributions, despite having weather conditions ideal for solar energy. The Eco Experts says this suggests a disregard for the environment and the population’s health.

Meanwhile, China is aiming to invest £292 billion in renewable energy by 2020, according to The Guardian. This means that while the country’s pollution levels remain notoriously high, it’s actively searching for a path to a greener future and therefore falls lower down the toxicity ranking.

The most toxic European country was Luxembourg which suffers from heavy pollution from neighbouring countries including Germany and Belgium. The UK ranked 81st for toxicity, while the US fared slightly worse in 66th.

The least toxic nations according to the report are mostly African nations such as Kenya, Mozambique, and Ethiopia, where a lack of industrialisation has led to less polluted air — although the study did not take water pollution into account, which is real problem in Africa.