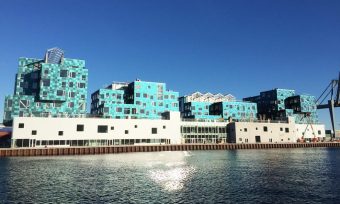 A new building in Copenhagen is covered by 12,000 colourful solar tiles, making it one of the largest building-integrated solar power plants in Denmark.

The tiles completely cover the building and will provide it with 300 MWh of electricity per year, meeting over half of the new campus of Copenhagen International School’s energy needs.

But aside from being the largest installation of its kind in the world according to the developers, the tiles are also architectural features in their own right.

Based on a new technology developed in Switzerland, the tiles are a distinctive “sea green” – not unlike Copenhagen’s iconic Little Mermaid statue.

The unusual color is the result of a complicated process of light interference developed over more than a decade in the labs of the Ecole Polytechnique Federale in Lausanne (EPFL).

It took the researchers 12 years to figure out how they could define the colour of their solar tiles without adding any pigments to the materials.

By ensuring that only certain wavelengths are reflected, they can now make the tiles appear in colours such as brick red, royal blue, golden yellow or sea green as used in Copenhagen.

The researchers developed special filters, which they applied to the glass panels in nanometric layers. The filter design determines which wavelengths of light will be reflected as visible color.

You may have seen a similar effect in a soap bubble or in a layer of oil on the surface of water.

“The iris effect creates a colorful rainbow on a very thin layer. We used the same principle and adapted for glass,” said Jean-Louis Scartezzini, the head of the Solar Energy and Building Physics lab at EPFL.

The rest of the sunlight is absorbed by the solar panel and converted into energy.

About half of all energy used in Europe is for cooling and heating, but so far renewables only contribute 18 per cent to that.

At a different university in Switzerland, ETH Zurich, researchers have developed an adaptive solar façade in another effort to help counter that.

The system can be installed on existing buildings to generate electricity while allowing daylight to pass through into the building. The panels can be shifted to provide shading when needed.

But it is not just renewable energy that is powering Europe’s buildings. Energy efficiency should be seen as an energy source in its own right according to the European Commission, which says energy efficiency will play a key role in speeding up the transition to clean energy while boosting growth and jobs.

The buildings sector accounts for some 40 per cent of Europe’s energy consumption. Renovating existing buildings, households and businesses could greatly reduce their energy use – and drastically cut bills for consumers and businesses.

Because two-thirds of Europe’s buildings were built when energy efficiency requirements were limited or non-existent, there is a huge opportunity to upgrade existing buildings to drive down costs and emissions.

Better insulation is one of the first places to start to keep heating and cooling bills down.

Keeping buildings warm accounts for more than 80 per cent of heating and cooling consumption in colder climates. In warmer countries, space cooling is the most important use – and it is growing because of climate change.

Delft University of Technology in the Netherlands is testing out a new innovation that acts like a building’s second skin.

Existing buildings can be upgraded with the pre-fabricated material and the occupants can continue to use the space during construction.

Researchers in Gothenburg, Sweden, are also working on lighter, thinner and more durable materials that will meet stricter building regulations. One of the projects at Chalmers University of Technology focuses on ultra-thin concrete wall panels.

The researchers use a waste product from the iron industry as an eco-friendly alternative material. It fully replaces traditional cement, rendering one of the most CO2 intensive industrial processes obsolete. The use of textile reinforcement instead of steel additionally reduces the amount of cement in concrete walls.

On average, the renovation rate of buildings in the European Union is only around 1 per cent per year, this means that renovating all of Europe’s buildings would take roughly 100 years.

Although in Germany and France, around 1.75 and 1.5 per cent of buildings are already being renovated annually, the European Commission says it is introducing new measures to further speed up the decarbonisation of existing buildings as part of its Clean Energy for All Europeans plan.

The European Union’s climate innovation initiative, Climate-KIC, already connects universities and businesses in its Building Technologies Accelerator to speed up the decarbonisation of the buildings sector.

To figure out how this could work best in practice, Climate-KIC is also testing out new energy efficiency innovations and building materials in real-life settings in homes and offices around Europe.