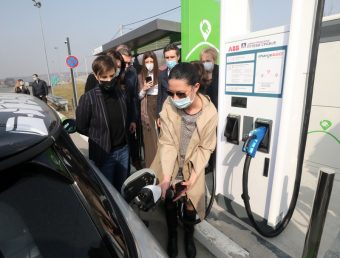 Photo: The Government of the Republic of Serbia

The Center for Collecting and Processing Data about Serbian highway traffic was opened yesterday at the toll plaza “Beograd” in Vrčin. Prime Minister Ana Brnabić visited the Center and also checked out the EV charger’s functionality which had been installed at the toll plaza.

She said that the Center would enhance the security of participants in traffic and improve environmental protection. Also, she commended the public company Roads of Serbia for the modernization and digitalization of the traffic monitoring system, explaining that the Center processes all the data acquired by surveillance cameras on highway and toll plazas and all signalization management at the highroads in Serbia also takes place there.

“The Center for Collecting and Processing Data about Serbian highway traffic will provide traffic speed monitoring and collect data about their registration plates and average speed on the highway. The Mihailo Pupin Institute has prepared the whole project. The Government will support Serbian know-how and innovations so that our economy becomes more competitive, and the fund will be allocated by The Innovation Fund, the Science Fund and many other funds we have established”, said Prime Minister.

She took an opportunity to see the EV charger’s performance that had been installed right behind the toll plaza in Vrčin, coming from the direction of Niš. This charger is an introduction of e-mobility development that should bring about a considerable reduction of air pollution in the country. As the prime minister explained on that occasion, there are eight EV chargers on Serbian highways, and the installation of additional ten EV chargers is budgeted for this year. According to the announcement on the Government’s official web site, around 90 EV chargers are available around the cities and municipalities in Serbia.

EV charger ABB HP 175 at the plaza toll in Vrčin was recently installed by the MT-KOMEX company and was integrated into charge&GO, the first regional web platform for EV charging. This system provides easy and fast charging of electric vehicles and EV drivers can also use the charge&GO mobile application for Android and iOS. 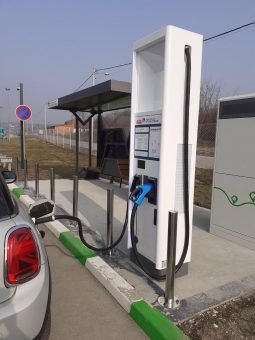 The Minister of Environmental protection, Irena Vujović said the subsidies for the purchase of electric and hybrid vehicles and the development of the necessary infrastructure serve as an encouragement to citizens to buy eco-friendly vehicles.

She said that traffic is the significant cause of air pollution globally, with an average of 22% of CO2 emissions and 12 % of PM pollutions. According to some estimation, in the upcoming years, every third vehicle in Europe will be eco-friendly, which is the standard that Serbia tries to reach.

Prime Minister pointed out that many initiatives are underway to reduce air pollution in Serbia. It is the reason for investment of more than 500 million euro in a Sulphur recovery unit in thermal power plants.

On that occasion, Brnabić informed that in the next few days, the decision would be published in the Official Gazette concerning the reductions of costs for gas connection by approximately 100.000 dinars per household.

From her point of view, it is a great incentive to all our citizens to connect to a gas network so that the number of individual furnaces can be reduced, which are also among the huge air pollutants.