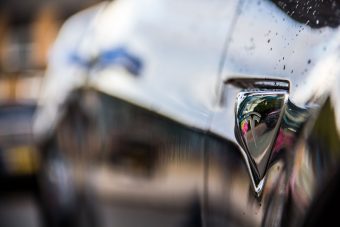 Elon Musk just announced that the already amazing and affordable Tesla Model 3 will feature the same photovoltaic glass technology used in the company’s recently unveiled solar roof system. According to Musk, the technology could be used to create a car roof that defosts ice and melts snow while continuously generating energy from the sun.

The CEO dropped some huge hints during a conference call regarding Tesla’s merger with SolarCity, where he also described the creation of a special Tesla glass division. The Model 3, expected to be released in 2017, is already making waves as the company’s first affordable electric vehicle.

The surprising price of $35,000 (before tax incentives) and the estimated 215 mile driving range are enough to consider trading in your gas-guzzler, but the addition of a solar roof is the cherry on top. While Musk did not come right out and say how the new technology would be integrated in the Model 3, his tweets seem to paint a pretty clear picture: “Solar glass tiles can also incorporate heating elements, like rear defroster on a car, to clear roof of snow and keep generating energy.”

Referring to the ability to incorporate heating elements directly into the glass solar panels, Musk all but gives away the plans for a paneled roof and windshield that can defrost and melt snow efficiently. He also gave reassurance that the system is “strongly net positive,” so melting away frost consume a minimal amount of energy. The merger between Tesla and SolarCity will not only benefit customers set on powering their homes with renewable energy, but also the everyday driver who wants to cruise around in an affordable, solar-topped EV.