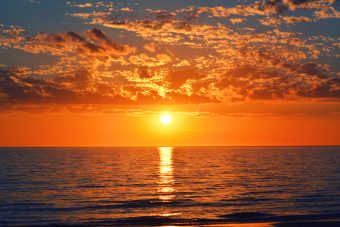 Two thirds of the planet is covered in water and so no surprisingly oceans have an inordinate effect on the Earth’s climate. They absorb vast amounts of CO2 from the atmosphere and regulate global temperatures.

But here comes bad news, courtesy of scientists in the United States who have just published their findings in the journal Nature. The oceans have been absorbing far more heat than previously thought. And by quite a large margin too: their estimate is that the actual degree is more than 60% than the figure cited in the most recent assessment by the United Nations Intergovernmental Panel on Climate Change (IPCC).

According to the scientists, this stronger than expected ocean warming indicates that the planet is even more sensitive to the effects of excessive fossil-fuel emissions than has been assumed. For each of the past 25 years, they explain, the planet’s oceans have absorbed an amount of heat energy that is 150 times the energy produced annually by humans.

“Imagine if the ocean was only 30 feet deep,” Resplandy said. “Our data shows that it would have warmed by 6.5℃ (11.7℉) every decade since 1991. In comparison, the estimate of the last IPCC assessment report would correspond to a warming of only 4℃ (7.2℉) every decade.”

The planet’s oceans has long been known to absorb around 90% of all the excess energy produced as the Earth warms so by knowing the actual amount of energy thus absorbed scientists can calculate the real degree of surface warming. “The result significantly increases the confidence we can place in estimates of ocean warming and therefore helps reduce uncertainty about climate sensitivity,” said the study’s co-author Ralph Keeling, a geophysicist at Scripps Institution of Oceanography in San Diego.

The researchers say their findings suggest that greenhouse gas production through human activities will need to be reduced by another 25% beyond previous estimates. This means that decarbonization efforts will have to be even more drastic and fast-paced in coming years if we are to keep climate change within manageable limits.