Bernard Bett leads research on neglected and emerging infectious diseases at the International Livestock Research Institute as part of the research portfolio under the Improving Human Health flagship.  His studies of zoonoses–diseases that are transmissible between animals and humans–informed the UNEP Frontiers 2016 Report and drew attention to the issue that now concerns just about everyone. In this interview, Bett discusses the delicate relationship between humans, wildlife and the pathogens that circulate among them. 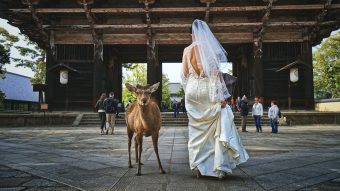 COVID-19 seems to have caught much of the world by surprise.  What is your reaction?

I’m not surprised by its emergence.  Many emerging diseases have been reported in the last 10 years but we haven’t seen anything like COVID-19, which has affected nearly every country in the world.  What is surprising is the rapid spread of this virus across the world.

Zoonotic diseases seem to occur more frequently than before.  Why is this?

Zoonotic diseases are increasing. A review of the global trends of emerging infectious diseases since 1940 confirms that their outbreaks have been increasing with time. About 60 per cent of these diseases are zoonotic and slightly over 70 per cent of the zoonotic infections are caused by pathogens that originate in wildlife. Some of the reasons why the frequency of the diseases is increasing is because of the increased close contacts between wildlife and humans, encroachments of lands, urbanization and socio-economic development. As the human population increases and economies develop, the demand for food and other goods increases. Industries like agriculture are intensified. Land use, climate change, economic development, population growth and people living in densely populated areas are all contributors for zoonotic emergence, making it easy for diseases to spill over from animals to humans.

Can you break that down?  Exactly how do pathogens merge?

Emerging diseases occur due to changes in the biological structure of a pathogen, the ability of hosts to resist infection and/or the ability of environment to control outbreaks.

A virus that might be harmless today could evolve into a much more pathogenic form, either through genetic mutations or recombination with other organisms that carry critical pathogenic traits. Small mutations often occur as viruses multiply, or as a mechanism to enable these viruses to survive better in their hosts.

For humans, we think of changes in livelihood practices—mainly socio-economic development, which typically promotes intensive agriculture where many animals are raised in a small, dense environment. Animals and birds that are often raised in such farms are of a narrow genetic diversity. Genetically homogenous host populations are more susceptible to diseases.

Land use and climate changes degrade the ability of an environment to control diseases. They destabilize pathogen-hosts interactions that occur in pristine environments, therefore increasing opportunities for zoonotic spillovers. Increased utilization of protected areas for example for horticulture, illegal grazing of livestock or bushmeat hunting bring humans and domestic animals into direct contact with potentially infected environments. When people degrade wildlife habitats or establish their own settlements in some areas, then they become part of the ecosystem. They become part the sylvatic cycle–the cycle of virus transmission that happens between animals in forests.

If you tie these three things together, you have an ideal environment for zoonotic diseases.

Would you say humans are diminishing the boundaries between human and animal life?

How does climate change play a role in this dynamic?

The relationship between humans and nature is quite delicate.  Where do we go from here?

In terms of diseases, biodiversity is key to maintaining the health of people, animals and the environment. Research has shown that when you conserve nature and when you have multiple host species in place, you reduce the overall risk of transmission of a pathogen through what scientists call dilution effect. This is because in a mixed population of hosts, some would be “dead end” hosts, which don’t allow an infection to occur, hence conserving nature is a way to mitigate disease transmission.

What are some practical lessons we might draw from the response to COVID-19 so far?

Firstly, we need to report these diseases as soon as they occur and mount an effective intervention. Secondly, it’s good to continue what we are doing now–developing drugs and vaccines which can be availed during epidemics. Thirdly, we should be thinking of incentives that allow communities to participate in disease control. Social distancing works well in some areas, but in others where livelihood practices require people to move from one place to another, it’s difficult to implement this measure.

What should we be doing differently, to reduce the occurrence and mitigate the impact of zoonotic diseases in the future?

Nature takes care of itself so the best way to manage zoonotic diseases is to conserve nature and protect biodiversity.

Interventions for emerging infectious diseases should be implemented through multi-agency collaborations espoused under the One Health framework. Zoonotic diseases affect humans, livestock and wildlife at the same time. Medical experts must come together with veterinary and environmental experts and stakeholders to find solutions to these diseases. Social scientists should also be part of these interventions because we need to better understand behaviour in order to implement any changes in communities working in hotspots for zoonoses.

Finally, we need to diversify our focus–look at the economy, look at livelihoods. Because at the end of the day when we want to recover from the epidemics or pandemics, we will go back to our livelihoods. It would be good for governments to think of multi-pronged approaches to managing COVID-19.