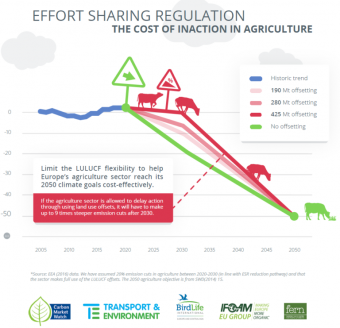 This week key policymakers of the European Parliament discuss the EU’s largest climate instrument. Ahead of the debate, five organizations expose how a loophole in the law could significantly increase the costs of post-2030 climate efforts by delaying the required emission reductions in the agriculture sector.

The Effort Sharing Regulation (ESR) covers around 60% of Europe’s greenhouse gas emissions; those from the transport, buildings, agriculture and waste sectors. The instrument has potential to unlock the low-carbon opportunities in these sectors and thereby bring clear benefits to citizens in the form of cleaner cities, more comfortable homes and healthier food options.

The proposed law sets national climate targets until the year 2030. However, there will be a significant cost of inaction if the longer-term transformation of the non-ETS sectors is not taken into account as well.

For example, under the proposed Effort Sharing Regulation, countries can use credits from planting trees to offset their agricultural emissions. If a high amount of forestry offsets is used to delay efforts in agriculture, the sector will have to make 9 times steeper emission cuts after 2030.

Some Member States and Members of the European Parliament have proposed to allow the use of a high number of forestry offsets so that the agriculture sector does not have to reduce its emissions in the coming decade. But doing nothing until 2030 would make the costs of meeting Europe’s 2050 climate goals more expensive.

Introducing a post-2030 trajectory for emission reductions, on the other hand, provides long-term predictability to investors and private actors. Several policymakers who are in charge of the file in the European Parliament have already recommended to integrate such a long-term vision for climate action in the Effort Sharing Regulation.

A robust Effort Sharing Regulation will be instrumental to scale up the low-carbon opportunities in the ESR sectors. Many SMEs are already active in the development of innovative solutions to reduce agriculture’s carbon problem, in fields such as animal feeds, micro-nutrition for plants and use of microbes to replace chemical pesticides and fertilisers. Azotic Technologies, for example, has developed a technology that will reduce the use of nitrogen fertilizer and cut the nitrous oxide emissions from agriculture in half.

The potential of the ESR to drive the low-carbon transformation of our economy can be maximized by closing the loopholes in the law. This can be done in particular by following these four recommendations: increase ambition in line with the upper end of the EU’s long-term climate objectives, set the starting point below the actual 2020 emissions, and don’t reward countries for underachieving, close loopholes that undermine the low-carbon transition, such as the use of forestry offsets and surplus ETS allowances, limit how much surplus can be banked to following years to help avoid the risk of not achieving the EU’s 2030 target.