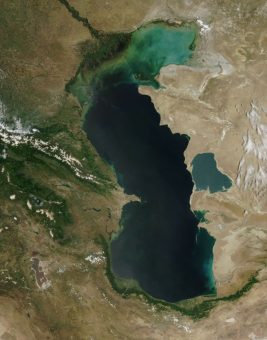 The results of the new study reveal that the largest lake on Earth has been evaporating slightly during the last two decades, which scientists associate with high temperatures and climate change.

The level of water in the Caspian Sea decreased from almost every year from 1996 to 2015 by almost 7 cm (a total of 1.4 meters in that period), according to research results.

The current water level in the Caspian Sea is just one meter above the lowest level to date, recorded in the late 1970s.

Evaporation brought about by warming temperatures appears to be the primary cause of the current drop in sea level and the decline will likely continue as the planet warms.

The new study began after Jianli Chen from the Space Research Center at the University of Texas at Austin and Clark Wilson, a geophysicist at the Jackson Geophysics School, also from the University of Texas in Austin, along with other researchers, used the Caspian Lake to analyze the data of two satellites of the Grace mission which was launched in 2002.