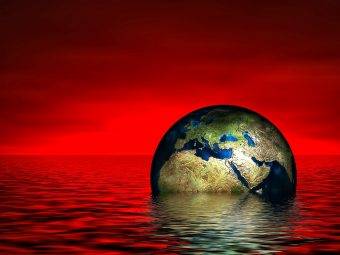 Removing the climate change page from the White House site won’t do anything to slow the damage to our planet, just as refusing to “believe” in science won’t help your home stay standing when dangerous, violent storms tear it from the Earth. And those storms are getting a lot worse, says new research from the University of Houston.

Efficiency is usually a good thing, but not when we’re talking about the energy running around in the world’s weather systems. Energy in the Earth’s atmosphere is described by a formula called the Lorenz energy cycle. The new study takes a long-term look at data from this cycle—35 years’ worth—to see how the energy has been affected by climate change. And the results aren’t good.

The efficiency of Earth’s “heat engine” is increasing, which means that previously stored energy is now running loose in the form of kinetic energy, which results in more atmospheric movement. In practical terms, this means that storms will be stormier, and much more destructive. And because the cycle usually has “positive trends,”—i.e., it’s hard to put that energy back in the bottle once its loose—it’s only going to get worse.

But these changes won’t be evenly distributed. The Southern Hemisphere will get the worst of the effects of these energy increases, which the researchers call “eddy energies.” Don’t think that folks in the top half of the world are going to get away with it, though. The climate is a complex system, but with more energy running loose, the effects will be simple to see: More dangerous storms, and more extreme weather in general. And it’ll happen whether or not you have your head buried in the sand.