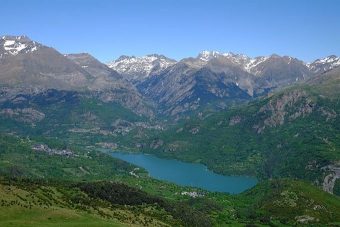 Temperatures in the Pyrenees mountain range have been climbing particularly rapidly in recent decades — with maximum temperatures there rising by more than half a degree Celsius by decade from 1970 to 2013 — according to a new study from the Rovira i Virgili University’s Centre for Climate Change.

The lead author of the new study, Núria Pérez-Zanón, commented on the temperature rise in the Pyrenees: “However this change is particularly marked in the most recent period (1970 to 2013), when maximum temperature rose by over half a degree per decade (0.57 °C per decade).”

A press release provides more: “In order to analyse this climate change in the Pyrenees, a team from Rovira i Virgili University’s Centre for Climate Change collected hundreds of climate series from meteorological observatories on the southern side of the Central Pyrenees and analysed the most complete and representative series from the area for the period 1910–2013.

”According to the paper, climate change had a greater impact during the latest period, particularly in the spring and summer months. Between 1950 and 2013, the percentage of hot years doubled, while the percentage of cold years decreased by half. There has been an upward trend in this parameter, with 18 of the last 20 years being hot years.”

As far as seasonal variation goes, spring has been the season that has warmed the most — with regard to both maximum and minimum temperatures. Accompanying this, there has been a drop in annual precipitation, though it is as of yet considered to be “not significant.”

“Individual series were subject to strict daily and monthly quality control to detect anomalous values, as well as homogeneity adjustments to minimise bias introduced by non-climate-related changes, such as location, modifications to the surroundings, or the equipment itself,” continued Pérez-Zanón.

As a reminder here, the Iberian peninsula as a whole is facing a harsh future as regards climate change — with rising temperatures and increasing aridity expected to put an extreme damper on regional agricultural productivity within just the near future.

The new findings are detailed in a paper published in the International Journal of Climatology.