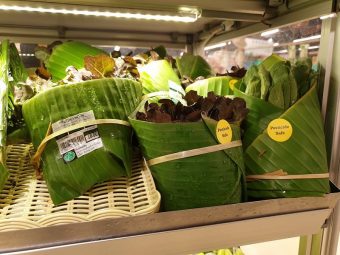 Supermarkets in Vietnam have adopted an initiative from Thailand that makes use of banana leaves instead of plastic as a packaging alternative.
Supermarket in Chiangmai, Thailand earned praise on Facebook for coming up with the eco-friendly packaging after a local firm featured it on their page last week.

The novel idea, which was an instant hit among citizens, soon caught the attention of Vietnamese supermarkets.

Big supermarket chains in Vietnam, such as Lotte Mart, Saigon Co.op, and Big C,have all started to follow in the Thai store’s footsteps by experimenting with banana leaves as a packaging alternative in their stores as well.

In an interview with VnExpress, a representative from the Lotte Mart chain shared that they are still in the testing phase but are planning to replace plastic with leaves nationwide very soon.

Aside from wrapping vegetables and fruits, the grocery chain intends to also use the leaves for fresh meat products. 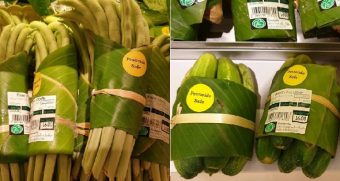 “When I see vegetables wrapped in these beautiful banana leaves I’m more willing to buy in larger quantities,” a local customer named Hoa was quoted as saying. “I think this initiative will help locals be more aware of protecting the environment.”

According to VN Express, the use of the leaves as packaging is a welcome addition to the numerous other efforts establishments in Vietnam are experimenting with to reduce plastic waste.

Big C, for instance, already offers biodegradable bags made with corn powder in its stores.
With Vietnam ranking number four in the world for the most amount of plastic waste dumped into the ocean, such efforts are of the utmost importance.

A recent report highlighted the incredible amount of plastic waste generated by Vietnamese people, disposing of about 2,500 tons of plastic waste per day.
As a Vice report noted, banning or reducing single-use plastic bags in supermarkets is a growing trend in Asia. 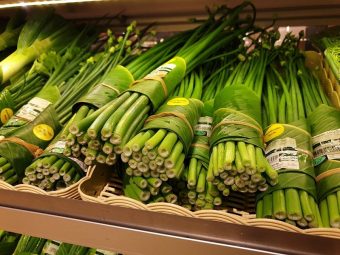 Just recently, South Korea banned the use of disposable plastic bags, requiring supermarkets and other commercial establishments to provide recyclable containers to customers.

Singapore supermarkets have also been launching campaigns informing the public on the need to reduce plastic bag use. Meanwhile, Taiwanese shops have started charging for single-use plastic bags to discourage customers from using them.

Meanwhile, China has seen a 66% drop in plastic bag use in over a decade since banning the use of ultra-thin plastic bags in 2008.