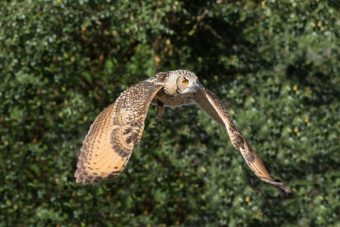 The owl is one of nature’s stealthiest hunters. It flies through the air at great speed but in nearly total silence, giving its prey no clue that it is about to become a midnight snack. Scientists in Japan and China were curious about how owls can fly without making a sound. Their conclusions may have important implications for the renewable energy industry by helping to tame the slight noise wind turbines make as their giant blades slice through the air.

“Owls are known for silent flight, owing to their unique wing features, which are normally characterized by leading edge serrations, trailing edge fringes and velvet-like surfaces,” says Professor Hao Liu of Chiba University in Japan. “We wanted to understand how these features affect aerodynamic force production and noise reduction, and whether they could be applied elsewhere.” The study was published this week in the journal Bioinspiration and Biomimetics. The findings could lead the way to quieter operation of wind turbines, propeller driven aircraft, and multi-rotor drones.

The research required the use of advanced computer modeling. It analyzed mathematical models of owl wings with and without leading-edge serrations using large eddy simulations used in computational fluid dynamics to simulate air flows. They also used particle image velocimetry and force measurements in a low-speed wind tunnel. Very sophisticated stuff and evidence of the hidden wonders of nature that are all around us, largely invisible to mere mortals.

The studies revealed that leading-edge serrations can passively control the transition between laminar and turbulent air flow over an owl’s upper wing surface at angles of attack between zero and 20 degrees, which means they play a critical role in aerodynamic force and sound production.

“We found, however, that a tradeoff exists between force production and sound suppression. Serrated leading edges reduce aerodynamic performance at lower [angles of attack] than 15° compared to clean leading edges, but can achieve noise reduction and aerodynamic performance at [angles of attack] above 15°, which owl wings often reach in flight,” Professor Liu reports.

“These owl-inspired leading edge serrations, if applied to wind turbine blades, aircraft wings or drone rotors, could provide a useful biomimetic design for flow control and noise reduction. At a time when issues of noise are one of the main barriers to the building of wind turbines, for example, a method for reducing the noise they generate is most welcome.”

I don’t know much about computational fluid dynamics, but I did find this stunning video of an owl in flight that clearly shows the leading edge of its wings in action. Frighteningly beautiful stuff that may help make wind turbines more amazing in their quietude and help them get located closer to population centers. 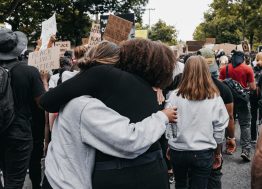