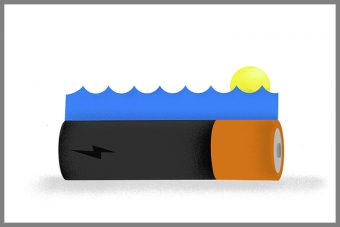 Solar energy has the potential to provide abundant power, but only if scientists solve two key issues: storing the energy for use at all hours, particularly at night, and making the technology more cost effective. Now an interdisciplinary team at Stanford has made significant strides toward solving the storage issue, demonstrating the most efficient means yet of storing electricity captured from sunlight in the form of chemical bonds. If the team can find a way of lowering the cost of their technology, they say it would be a huge step toward making solar power a viable alternative to current, more polluting energy sources.

The basic science behind the team’s approach is well understood: Use the electricity captured from sunlight to split water molecules into hydrogen and oxygen gas. That stored energy can be recovered later in different ways: by recombining the hydrogen and oxygen into water to release electricity again, or by burning the hydrogen gas in an internal combustion engine, similar to those running on petroleum products today.

Although the process is well understood, the challenge has been turning this science into an efficient industrial process. That’s where a team led by Thomas Jaramillo, an associate professor of chemical engineering and of photon science, and James Harris, a professor of electrical engineering, has made a significant improvement. In work published in Nature Communications, they were able to capture and store 30 percent of the energy captured from sunlight into stored hydrogen, beating the prior record of 24.4 percent.

“This milestone brings us much closer to a sustainable and practical process to use water-splitting as a storage technology,” Jaramillo said. “Improving efficiency has a remarkable impact on lowering costs. We have to continue work on finding more ways to lower the costs to compete with conventional fuels.”

The most important question for the team, though, was not how much energy they captured, but how much energy was stored through water splitting. To solve that question, Jaramillo and his collaborators built on research they have been conducting on how to improve the performance of catalysts – materials that speed up chemical reactions but are not consumed in the process. To store electricity captured from sunlight, the team looked in particular at water-splitting catalysts, in which electrons flow through the catalytic materials to break apart the stable H2O molecule.

Much of the catalytic process in the Stanford experiment is built on their previous advances in the area, with one particularly important approach to achieve their record energy capture. Most photovoltaic-powered water-splitting reactions use a single electrolysis device, but this team was able to combine two identical electrolysis devices in such a manner to produce twice as much hydrogen, making use of their higher-efficiency solar cells and putting them to work.

“Tuning all the elements, electronics and the chemistry was critical,” Harris said. “The entire system has to be perfectly balanced or the process wouldn’t work at all.”

When their experiment was done, their measurements showed that 30 percent of the energy originally collected by the triple-junction solar cells had been stored in the form of hydrogen gas.
Now that the Stanford team has demonstrated this record-setting efficiency in the use of water-splitting to store sun power, the focus shifts to costs: the triple-junction solar cells and catalysts they used, which included platinum, are fine for proof-of-principle experiments but not for an industrial process. “But what we’ve done is demonstrate how a systems approach can vastly improve storage efficiency,” Jaramillo said. “Now we have to find ways to get similar results with less expensive materials and devices.”

Jaramillo and Harris say that one big reason for the success of this research is the collaboration among different engineers and scientists. The team brought in 11 researchers, including collaborators from the SLAC National Accelerator Laboratory and experts in chemistry, process engineering and electronics to achieve two goals – first to squeeze the utmost in power from sunlight, and then to store as much of this as possible through water-splitting chemistry.

“It took specialists in different fields to do what none of us could have done alone,” Harris said. “That’s one of the lessons of this result: There is no single fix. How everything links together is the key.”