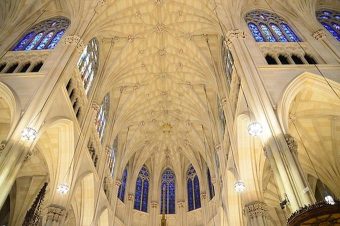 St. Patrick’s Cathedral on New York’s Fifth Avenue is undergoing a $200 million renovation. Part of that upgrade is a new $35 million geothermal heating and cooling system that replaces the steam boiler and air conditioning system installed nearly 60 years ago. The new system is expected to reduce the cost of heating and cooling the 76,000 square foot cathedral and surrounding campus by about a third, which will also keep about 94,000 kilograms of carbon dioxide out of the skies over New York City every year.

“It was not only the most sustainable, cost-effective, long-term energy option for the cathedral, but the option that best aligns with the greater good of New York, and not just today, but for generations to come,” Monsignor Robert T. Ritchie, the rector of St. Patrick’s Cathedral, tells the New York Times. Jeffrey Murphy, leader of the team from Murphy Burnham & Buttrick Architects that is overseeing the entire renovation, adds this insight: “If you are an institution that isn’t going to be here for hundreds of years, you may do something less expensive. But if you are interested in sustainability, and you are interested in the long haul, it is a great system.”

The heart of the geothermal system is a collection of 10 wells 8″ in diameter drilled into the bedrock beneath the cathedral. The deepest of the wells goes down 2,200 feet. They feed groundwater at a constant 55º F into a complex jumble of pipes, condensers, and compressors that fit inside the cathedral’s former boiler room. The designers weren’t entirely sure the system would be capable of handling all the heating and cooling needs of the campus, so they included a conventional cooling tower and gas fired furnace as a backup, just in case. But during the year the system has been in place, it has kept up with the hottest summer weather and coldest winter temperatures without assistance.

One of the requirements for the geothermal system was that the outer and inner appearance of the cathedral not be altered in any discernible way. The diocese of New York hopes the switch to geothermal will inspire curators of other historic buildings in the city to follow suit, something they would not be inclined to do if it meant changing the look of their buildings.

Geothermal is not a magic cure for all older buildings, however. The General Theological Seminary, the Episcopal seminary in Chelsea on Manhattan’s west side, began experimenting with a geothermal system in 2005 but ended up using it for only about a quarter of its needs. “If you don’t take into consideration the cost of machinery and the maintenance over an 80-year period, sure, it’s a great deal,” says the Very Rev. Kurt H. Dunkle, the seminary’s dean and president. “But when you take into consideration that the submerged pumps have to be pulled out and maintained and sometimes changed out, for us it made less economic sense than any projection ever described.”

Reverend Dunkle’s reservations may sound familiar to those considering the purchase of an electric car. The technology is changing fast and what is state of the art today may be hopelessly out of date in a few years’ time.

New York City is a strong proponent of geothermal systems and uses them in several facilities managed by the city, including the Queens Botanical Garden, the Brooklyn Children’s Museum, and the lion house at the Bronx Zoo. Cornell University has a new technology campus on Roosevelt Island which relies on a geothermal system.

Jeffrey Murphy lauds the diocese for choosing to convert to a geothermal system as part of its renovation program. “I think it really showed a profound sense of optimism and in some ways audaciousness,” he says, “that this venerable institution would consider geothermal technology for their building.” Celebrating traditions that reach back in time more than two thousand years is no reason not to leverage the most modern technology available to protect an historic landmark and serve the needs of the parishioners and visitors to the cathedral while making the surrounding community more sustainable.

Geothermal technology is not limited to large buildings like St. Patrick’s Cathedral and commercial structures. All the benefits it provides for large energy users apply equally well to residential use as well. Researchers at Oak Ridge National Laboratory say they have invented a new pump for geothermal systems that is 50% more efficient. In fact, new techniques don’t require drilling holes in the earth at all. Instead, trenches as little as 4 feet deep can provide many of the same benefits as groundwater systems. Before installing a new boiler or air conditioning system, you may want to explore the benefits that a residential geothermal system could provide for your own home.