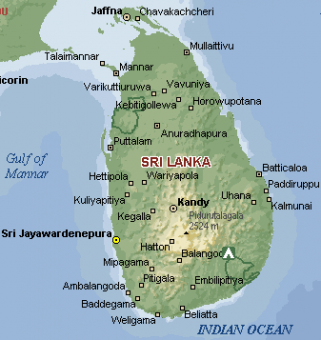 Sri Lanka has given indications it intends to significantly increase the share of renewable energy in its electricity generation by the end of the next decade. Secretary to the Ministry of National Policies and Economic Affairs recently told media outlets that his government is considering increasing the share of renewable energy in electricity generation to 100% by 2030. The new consideration by the Sri Lankan Government represents a significant increase over the recently stated plans of the countries electricity utility. The Ceylon Electricity Board (CEB) proposed the Long-term Generation Expansion Plan 2015-2034. Sri Lanka’s installed power generation capacity at the end of 2014 was 3.9 GW, of which 11%, or 442 MW, is based on renewable energy capacity.

Renewable capacity is dominated by mini-hydro power technology, which contributes 293 MW capacity, while wind energy technology represents 124 MW capacity. The CEB plans to increase the renewable energy capacity to 972 MW by 2020, which would contribute 20% to the total power generation in the country. Renewable energy’s share in power generation is currently expected to peak in 2025 at 21.4% with an installed capacity of 1,367 MW. As part of the Long-term Generation Expansion Plan, installed renewable energy capacity in 2034 is expected to reach 1,897 MW, with wind energy being the dominant technology. Wind energy is expected to overtake mini hydro in terms of installed capacity by 2023.

Installed capacity targets for the four renewable energy technologies projected by the CEB are mini-hydro: 673 MW; wind energy: 719 MW; biomass-based power: 279 MW; and solar power: 226 MW. The Public Utilities Commission had criticized the Long-term Generation Expansion Plan proposed by the CEB, claiming that it did not focus much on the promotion of renewable energy technologies.