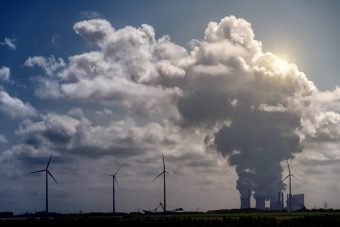 Sometimes it feels like the world is asleep and not jumping on the tremendous potential of low-cost solar power and low-cost wind power to stop global heating and catastrophic climate change. Sometimes you want to jump up and clap with enthusiasm at strong actions moving us forward. Luckily, this story should lead to the clapping.

Spain just closed down 7 of its remaining 15 coal power plants on June 30. That’s a flick of the switch (or something a few switches perhaps) and 47% of the country’s coal power plant capacity was shut down. And more will shut down soon.

Of course, this was years in the making. Spain built renewable energy power plants that allowed for this. Also, the European Union broke through the country’s coal and utility lobby to not allow corporate welfare to steal progress from the people of Spain. State aid to save coal mines was deemed illegal and EU regulations requiring that old coal plants be cleaned led to utilities deciding it just wasn’t worth the money to keep them open — upgrading coal plants to make them less dirty was too expensive.

Regarding the shutdowns, El País notes that the Spanish government seems to have had little to do with the early closure, adding that the government wouldn’t even commit to a phaseout year with an alliance of other countries (even though, apparently, Spain would easily meet the target). “Several of these power stations have not been producing electricity for months because it is no longer profitable due to a combination of market conditions and political decisions by the European Commission, which is the executive branch of the EU.”

When Does Spain Hit 100% Renewable Electricity?

It’s unclear how long the remaining 4 coal power plants will be in operation, but it’s safe to say Spain will be one of the first countries (or the first country) to shut down a decently sized fleet of coal power plants. There are several countries that are already at or near 100% renewable electricity, but they typically rely heavily on hydropower and have for a long time.

Spain does still have sizable fleet of natural gas power plants, so the party isn’t over yet — or isn’t started yet. We’ll keep you informed as more progress is made.

Electric Cars in Spain Even Greener

One thing this coal shutdown means is that it has gotten greener and greener to drive an electric car in Spain. Spain’s EV sales are moderate — or you could say weak in such a hit European EV market — with just 3.7% of auto sales in the first 5 months of the year being plug-in vehicles, and only 1.9% fully electric vehicles, according to EV Volumes. But expect the market to grow quickly as it has in other countries. Electric cars only get cheaper, better, and more competitive by the day. It’s already cheaper to operate an electric Uber than a diesel one in Madrid, and many drivers should soon realize that.