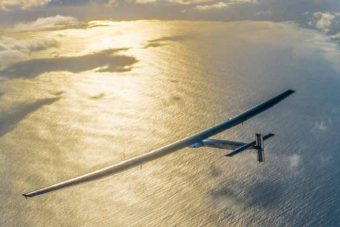 The sun-powered Solar Impulse 2 aircraft set off from New York’s JFK airport early on Monday, embarking on the transatlantic leg of its record-breaking flight around the world to promote renewable energy.

The flight, piloted by Swiss adventurer Bertrand Piccard, is expected to take about 90 hours – during which Piccard will only take short naps – before landing at Spain’s Seville airport.

“It’s my first time taking off from JFK,” Piccard said over a live feed from the aircraft as he headed into the night sky at approximately 2.30am.

The voyage marks the first solo transatlantic crossing in a solar-powered airplane, and is one of the most difficult legs in Solar Impulse 2’s journey around the world.

“Goodbye NewYork! Now looking forward to the vast expanse of the Atlantic Ocean and reaching Europe in a few days,” Piccard tweeted, posting a picture of the darkened sky and city lights below.

The plane, which is no heavier than a car but has the wingspan of a Boeing 747, is being flown on its 22,000-mile (35,000-kilometre) trip by two pilots taking turns, Piccard and Swiss entrepreneur Andre Borschberg.

“I’m in the cockpit this time, but we’re flying together,” Piccard told Borschberg before takeoff.

The pair have alternated legs of the journey, with Borschberg piloting the flight’s final Pacific stage, a 4,000-mile (6,437-kilometer) flight between Nagoya, Japan and Hawaii.

The 118-hour leg smashed the previous record for the longest uninterrupted journey in aviation history.

The plane, now on the 15th leg of its east-west trip, set out on 9 March, 2015 in Abu Dhabi, and has taken the aircraft across Asia and the Pacific to the United States with the sun as its only source of power.

“Smooth takeoff and all Si2 systems have been checked here at the Mission Control Center for the Atlantic Crossing,” Borschberg posted on Twitter soon after Solar Impulse 2’s departure.

Prince Albert of Monaco, a patron of the project, gave the flight the go-ahead from its mission control center in Monaco, telling Piccard “you are released to proceed.”

A third of the journey still remains for the plane, which will fly through Europe and on to the Middle East back to Abu Dhabi after crossing the Atlantic.

The single-seat aircraft is clad in 17,000 solar cells. During night-time flights it runs on battery-stored power.

It typically travels at a mere 30mph (48kph), although its flight speed can double when exposed to full sunlight.