Cooling the Earth by injecting sun-blocking particles into the stratosphere could be “remarkably inexpensive”, according to the most detailed engineering analysis to date. 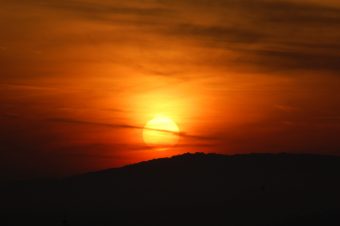 The fear of a rogue nation or military force unilaterally taking control of the global climate is unfounded, the researchers added, as the many thousands of high-altitude flights needed to affect global temperatures could not escape detection.

The new research estimated the technology costs of putting millions of tonnes of sulphate particles high into the atmosphere. This form of geoengineering mimics major volcanic eruptions, which have significantly reduced global temperatures in the past.

“We show that a hypothetical deployment programme, while both highly uncertain and ambitious, would be technically possible,” said Gernot Wagner from Harvard University. “It would also be remarkably inexpensive, at an average of around $2bn to $2.5bn per year.” About $500bn (£388bn) a year is currently invested in green technologies.

The idea of geoengineering is controversial, with opponents arguing it could seem like an easy solution to global warming and weaken efforts to cut the root cause of emissions. Others warn it risks serious unintended consequences, such as droughts and damage to crops. In October, more than 100 civil society groups condemned geoengineering as “dangerous, unnecessary and unjust”.

However, many scientists say not conducting geoengineering research would be even more dangerous, because climate change may become so bad that governments feel compelled to deploy it despite not knowing its full consequences.

“Unfortunately, climate change is dire enough for us to have to consider drastic action,” said Dr Matthew Watson at the University of Bristol. “Some argue against researching these ideas but personally I think that is a mistake. There may come a time, in a future not so far away, where it would be immoral not to intervene.”

The new study, published in the journal Environmental Research Letters, found that the most cost-effective way to deliver the particles requires the development of a new type of aircraft. If the sulphates were released from commercial jets, the particles would fall out of the sky in days.

No aircraft exists that could carry tonnes of particles to the 12-mile (20km) altitude needed in order for them to remain aloft for a year or more, and rockets would be far too expensive. The new plane would need much larger wings and four engines rather than two, as the air at 12 miles is just 7% as dense as at sea level. “It would be an unusual design, but one does not need technological breakthroughs,” said Wake Smith, an aviation engineer who worked with Wagner.

The researchers calculated the cost of a 15-year programme in which six to eight new planes are added each year, including crew costs, maintenance, insurance, fuel, landing charges, spares and training.

The programme would begin with 4,000 flights a year and end with 60,000 flights a year by almost 100 aircraft. “The amount of flights happening would be so big it could not be done secretly,” said Smith. “This is not like the German naval buildup before the second world war. If people were doing this, we would know about it.”

The impact of the programme would be to reduce warming by 0.1C per year, with a total reduction of 1.5C, said Wagner. This is based on emissions being curbed from today’s levels but still rising and leading to 3C of warming, a level considered catastrophic by scientists. A major recent report from the UN’s Intergovernmental Panel on Climate Change (IPCC) cited 1.5C of warming as a far safer limit.

The researchers said they were not advocating the deployment of solar engineering, but believed it must be assessed. “It can only be part of an overall climate policy portfolio that first includes [emission cuts], adaptation and carbon removal from the atmosphere,” said Wagner.

The IPCC report said geoengineering might be adopted as a temporary “remedial measure” in extreme circumstances. “If the world runs through the door with its hair on fire, we need to understand what the options are,” said Smith.

Prof Joanna Haigh at Imperial College London said: “This plan is a distraction that may well encourage weaker action on emissions reduction.” She said the money would be better spent on helping nations cut emissions and protect themselves from extreme weather.

The costs of compensating for droughts, floods and food shortages that geoengineering might cause would be much larger than the engineering costs, said Phil Williamson at the University of East Anglia. “International agreement to go ahead would seem near-impossible. Rapid reductions in emissions remain the best way to avoid climate catastrophe.”

Blocking sunlight does not address other problems caused by global warming, such as the acidification of the oceans. However, Prof Peter Cox at the University of Exeter said: “The fact that researchers at one of the world’s top universities are costing the deployment of such a radical [geoengineering] scheme shows how urgent the climate change problem has become.”