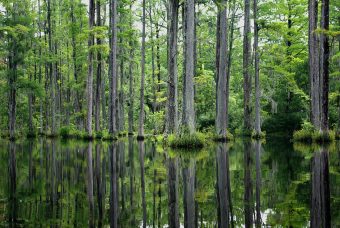 The Polish city of Krakow has some of the worst air pollution in the world. In hopes of improving the city’s air quality, FAAB Architektura proposed a smog-fighting music academy fitted with a German air purification system that they say works effectively as 33,000 city trees. The music academy was designed as part of a larger “Krakow Music City” masterplan that envisions a largely car-free and environmentally friendly development atop a former military base.

Located between Krakow and the Vistula River, the proposed masterplan is designed to blend into the natural landscape with its vernacular wooden lap panel cladding and use of energy-efficient technologies. Around 1,300 square meters of a Green City Solutions-developed air purification product would be embedded in the music academy’s moss-covered rooftops. The special moss culture converts air pollutants into biomass.

The green-roofed buildings comprise an education wing, concert hall, and small guest building carefully placed around existing trees and designed to immerse students and visitors in nature. Ground heat exchangers would be used to reduce energy use. Rainwater would also be collected in an underground tank and reused wherever possible. FAAB Architektura submitted their proposal to a design competition hosted by Akademia Muzyczna w Krakowie, which will reveal the winning entry on March 31, 2017.